Cynthia Guenther Richardson in drinking and driving, short fiction about love and loss, spirtuality and recovery, substance abuse and loss, Uncategorized, women and addiction May 27, 2011May 27, 2011 1,456 Words 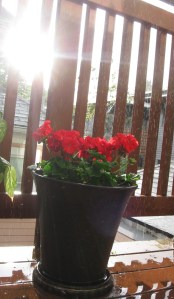 Another overnight rainstorm had pummeled the earth until leaves and flowers bent in surrender.  The air smelled faintly of mud and lilacs as Nora opened her balcony doors to survey a brightening sky above roof lines and treetops. Two stories below her, the neighbors’ long driveway was filling up with tables and a couple of old chairs. Marty and his wife, Hanna, were setting up for a yard sale despite the iffy forecast.

“Hey, Nora!” Marty called. “Anything you want to add to our mess?”

“No, thanks,” Nora answered, waving back. “I just donated a pile of things to the shelter.”

She thought about the boxes of shoes and purses she hadn’t unloaded yet. They gaped at her daily whenever she entered her bedroom; it was hard to let go of old, still-good leather products. She chided herself. They ought to be relieved of their uselessness and passed on. Nora set her teacup down on the tiny glass-topped table, dragged out two boxes, and started eliminating, haphazard pile growing. Then she consolidated the “toss” items and took them down to Hanna, who encouraged her to be generous with low pricing. She found the whole thing tedious and tiring, so retreated back to her balcony.

People started to show up at eight-forty-five and for good reason. Marty and Hanna had a wide array of cheap offerings and customers rooted through books and old LPs, DVDs, jewelry and clothing. They admired a buffet and brocaded wing-back chairs. Nora noted that two pair of her shoes were bought. The garage held enticing cast-offs, from exercise equipment to older bikes to a 50-piece rose-covered china set the couple had avoided using for twenty years. Nora watched as she finished her muffin, licked her fingers. What did people want with so many used things? It struck her that the more one got rid of, the more one felt compelled to replace.  She bet most of the shoppers had things falling out of closets at home. She picked up her cup and plate; she had work to do.

Nora was turning to step inside when a flash of azure blue caught her eye. She looked closely at the clothesline strung across the drive. A long, sleeveless cotton dress hung at the end of the line, swinging in a the fresh breeze.  An ivory lace scarf trailed from its scoop neck. A wave of shock raced through her. She ran downstairs, around the corner and up the driveway and when she reached for the dress, it was gone. Frantic, she searched the arms of several women in the cash-and-carry line. When it wasn’t to be found Nora walked to the garage and scanned the dim interior. And there it was: slung carelessly over the arm of a teen-aged girl in tight, raggedy blue jeans, flip flops and a loose, likely vintage black T-shirt with the band Guns and Roses on the back. She stood by a man who studied tools spread out on a piece of plywood settled betweentwo saw horses. Nora wanted to stop the young woman before she lost her chance but hesitated. It was only a used dress. She willed the girl to look at her but she continued to browse. When Hannah called out to Nora and asked if she might spell her at the check-out table, Nora reluctantly left the garage and took up her post.

She watched three of her purses and another pair of shoes leave the premises. She was glad they were gone. The metal money-box was filling up nicely as she waited for Hanna’s return.  The more Nora thought about the dress–its soft, graceful lines with the exquisite lace scarf–the more she needed it.

When she looked up again the teen-aged girl stood before her. She put her finds on the table: three leather purses, a crock pot, gold-trimmed glass coffee carafe, four woven place mats, a pearl-embellished sweater. And one long blue dress with scarf.

“Well, it’s the start of my shopping. I better find a lot more out there.”

Nora raised her left eyebrow involuntarily and gave a half-smile. “You’re a diehard yard-saler, then?”

The girl tucked her brown and bleach-streaked hair behind her ears.   “It’s how I make money. You know, I buy and sell. I take stuff to vintage shops, second-hand shops, that sort of thing. Have to get by somehow. I’m on my own out there.” She got out her cash and counted it slowly. “So–how much?”

Nora bit the side of her lip. “I’m not sure. The dress and scarf might not be for sale.”

“What? Sure it is. I got it over there.” She nodded at the clothesline. “It’s a great warm weather dress. It costs ten bucks but I can get twice that. The scarf goes with it, too, right?”

Nora placed her hands flat on the card table and leaned forward. “I mean, I might not agree to let you buy it. I’d like it for myself.”

The girl snorted. “Well, you know, first come, first serve! I get that you like it but my dibs. Now, what do I owe, lady?”

Nora looked at the rumpled wad of bills in the girl’s hand and then at the dress. Only ten dollars on the sticker. How could something like that be had for so little? She stood up.

“Look, here’s the thing. I really need this dress, too. It matters to me. I don’t know how it got there. It must have been left behind in the house and no one knew it was there or cared. But it belonged to someone, someone who used to live right here. An important person.”

“Come on, everything at a yard sale belonged to somebody…what are you saying?”

“It belonged to Citrine. Citrine Devlin. My best friend. ” Nora felt the tears hot at her eyelids and looked up at her balcony. “I live up there. And Citrine lived in the lower level of this house until last year.”

The teen-ager examined the scarf and whistled. “Wow. Citrine. A very sweet name. Different.” She smoothed the rich blue cotton of the dress.

“Yes. Unique, really. Like her.”  Nora saw Hanna come up to the table and hover. “She was the sort of friend you always look for but hardly ever find. You know what I mean? Just a really good woman.”

Hanna touched Nora on the back. “I’ll take my spot back. Thanks. Isn’t it great the sun came out! I guess you’re all set to buy?” she asked the girl.

“Not yet.” The teen moved aside and let the next person ahead. “So what happened? To this Citrine person?”

But Nora was walking down the driveway, trying to stand tall and not run, stifling the urge to scream at the ignorant girl, the careless neighbors who put out that dress, the wretched wet flowers. She had been blind-sided, that was all. She wasn’t expecting the dress to show up, to remind her.

Nora stopped but didn’t turn. “Drunk driver. An pretty night in June. On her way back the little art gallery she owned; there had been a show opening. It was eleven when she left; I left right before her by about ten minutes. The moon looked amazing as I left downtown, drove up into these hills. We were going to have coffee the next morning, talk about the opening, her own work. But she was gone before I even got home that night, you understand? Some kid, a guy who had been to a graduation party. Too many beers or mixed drinks or whatever his poison was.” Tears fell like shiney stars from her eyes, and plummeted down her cheeks. “Isn’t it a random, crazy world? We don’t know what’s coming most of the time.”

The girl suddenly spun her around; she held tight to Nora’s arm. Then she closed her dark eyes, and when she opened them they were wide and still, but smoky with her own thoughts. “I know how it is; I lost somebody. Heroin overdose. So: the blue dress and scarf should be yours. Have to be. There are things that need to be with a special person. And you’re the keeper of that treasure from then on. ”

She held Citrine’s dress out to Nora, then put down her bag of items and wrapped Nora in her thin arms. They stood that way as the lilac bushes whispered nothing of import and raindrops shook free from above and wet their hair,  with one blue dress and delicate scarf safe between them. 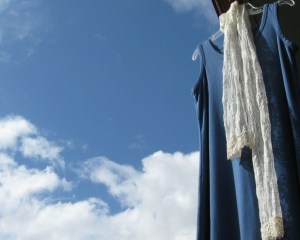