I am not a seasoned traveller, the sort that easily navigates  the barbaric mazes of airports. Neither do I speak fluently many languages of exotic locales. For me, “foreign” means our cousin Canada. I have sung praises of the beauty there–boating through the San Juan Islands, sampling the delights of Victoria and Vancouver, coming face-to-face with bears in Banff National Park. But other than Canada, my explorations have thus far remained within my own country. The primary modes of travel have been car and feet. The last time I flew anywhere was in 2007 when a daughter graduated from Union Theological Seminary, and it took love and will to get on that plane even though as a young adult I loved to fly.

In September when Marc and I planned a trip to Virginia and Florida to visit family, my excitement and anxiety were contained by the distractions of daily living. I had been the one to bring up the trip despite a mild dislike, perhaps more accurately a moderate loathing, of flying ever since events in 2001. I kept focused on the final destination and the experiences we would enjoy. By the first of January I was checking weather reports and planning what to pack. My goal was to be ready for anything but not embarrass my husband with a surfeit of bags. And to be calm upon arrival. I considered the leftover Valium Marc still had after dental extractions. Or the natural kava kava, which I had used when I flew to and from my mother’s funeral May 2001. In the end Dramamine was secreted away in my cloth bag beneath books and magazines, just in case.

But the moment I get on the  plane I know it will be a good trip. We haven’t visited my in-laws in a long while and we’ll see two daughters, as well. I am leaving behind wind-driven, chill rain in favor of delicious sunhine. More crucial, we are abandoning work and humdrum routine.

So it happens: I peer out a small window. My breath catches in my throat as the plane rises smoothly into the sky: I am on a small adventure and anything wondrous and fine can happen. In an instant I fall under a spell.

The world looks kinder from above, as if all the earthly things have come to order. It is as though the fine raiment of the land is meant to complement the colors washed along the horizon. As we near Chicago and the sun descends,  amber beacons pulse across the rolling earth, while the sky gives forth a display of piercing white lights.

From where I sit the Big Dipper appears to be in conversation not only with a perfect moon–which trumpets light all the way to other galaxies–but also with the criss-crossed lines of city and town, the slip and slide of pale country lanes against shining rivers.  I wonder what magic things spill upon the land from the mammoth ladle above.

I rest my eyes on the fullness of the scene–how much there is to love when venturing far, how great the mysteries as we leap in the face of reason and then lilt within the far-flung dark. The city’s lights flare out like a giantess’ necklace on an indulgent bosom.

And the moon holds steady as the night spreads its vast velvety wings. The sky, bemused, opens to the watchful audience of the universe beyond. Lulled by night, face pressed against the glass, I watch the geometry of roads and tiny cars come closer, the plane tilting and sailing toward a better known world, yet no less extraordinary.

The story could end right here, but disembarking feels like leaving one dream for another. I am a space traveller cruising in for a pit stop.

Then suddenly, in Virginia with daughter Naomi, artist/wandering pilgrim, who has been to Europe, to the Caribbean and Iceland, to places I cannot pronounce. To our surprise, it is rainy and cold just like Oregon the first day, but on the second the sun joins us. We take to the sights and sounds of rustic Jamestown, then Colonial Williamsburg. Encompassing 301 acres, with 88 of the original 18th century shops, houses, outbuildings plus hundreds of others reconstructed on original foundations, this is the past vibrant within the present.  We stroll Duke of Gloucester Street and stop to chat with the Shoemaker, whose supple leather shoes are meticulously hand-made for a man of more or less means in the 1700s. We visit the Weaver and learn about beetles from South America that provide the brilliant red that dye the wool the women spin. Then off to the Magazine and Guardhouse where I come upon not only rifles and muskets but a Hatmaker sitting on a bench. He is proud of his work, and informs us that he also can make shoes and is a blacksmith. At Chownings Tavern I enjoy tasty chicken stew and corn bread, then we’re off to see the Cabinetmaker–would I be interested in a lustrous $20,000 harpsichord? It plays beautifully as I run my fingers over the keys. 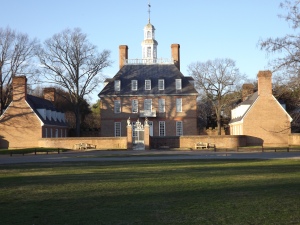 And so it continues as the sun illumines all. The Silversmith, the Cooper, the Milliner and Tailor. Every shop and house we enter or wonder over holds the hint of lives lived long ago and well, of trials, aspirations, romance. It is like walking hand-in-hand with those who planned and built the bustling town, had heady political discussions, reared families, fought illness and loss.

I stand before the Governor’s Palace and swear I hear the rustle of silk, the resonant ring of crystal from deep within the rooms. Other women and men have shared lives full of pleasure, burdensome with toil. They watch us from the shadows as the bright wind runs through bare treetops and stirs my hair.

On the last night, we three gather at the hotel suite and partake of a redolent beef stew that  Naomi started in the Crockpot in the morning. It is reminsicent of the recipe I often made for our large family a lifetime ago. But it tastes richer. Better seasoned. More tender.

Another place altogether with its shy manatees and ubiquitous palms, alligators common and fierce,  lumbering turtles. It’s flat, subtropical landscape is strange enough to me to be a foreign land and yet the warmth of the breezes and languor of the people are a welcome respite after chilly Virginia. And there is family again to welcome us, daughter Cait, who is a minister, and my in-laws. We mosey through Matlacha’s gaily painted shops, then enjoy lunch and melt-in-your-mouth pies on the shore of Pine Island. 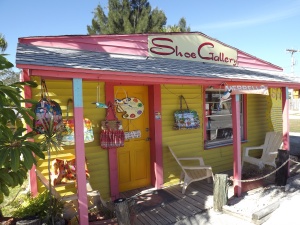 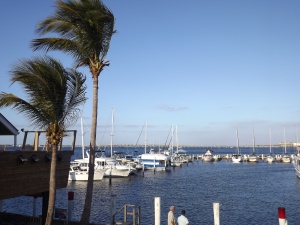 The water is a glittering blue that changes hue from moment to moment, place to place. There are boats to watch and piers to walk, along which the sea ever beckons with it powerful rhythms and brilliant depths. The sun moves over skin like warm honey, then removes itself with grace, an empress, bestower of rainbowed light upon the horizon.

At Beth’s, my elderly mother-in-law’s, there is much talk and music. Marc and his brother pick up guitars and sing old hymns, John Denver and Carol King, other random tunes. Their voices rise and fall as though meant to do just this together. Tonight Beth closes her eyes, taps out the beat on the arm of her chair. She telegraphs her love with smiles and soft comments. When she asks me to sing as well,  I am busy videotaping each moment, but hum along a little, sing a few phrases: “If I had a song, I’d sing it in the morning, I’d sing it in the evening, all over this land.” Cait nods at the hymns; my sister-in-law encourages our men. Laughter is generous as well. We are parts of a whole in that room.

In a few days we leave. I do look back. But the planes are still majestic vehicles that carry me through the atmosphere, over the worn garment of earth’s surface. I think of the millions of lives we are passing over, people working and resting, making love or devising plans, recovering from loss or creating something fascinating.

When we arrive in Portland, it is raining, of course, but it rains on top of rare snow. All this moisture keeps the land lush. Even weary, it feels just like home; we are happy to be here, as well.

The photos I study show me more than expected. Some are better than others, but each one tells such a story. Every familiar face is better known now. One trip took me out of myself, toward many others,  and back again. The views have been excellent, the weather everywhere, just right. 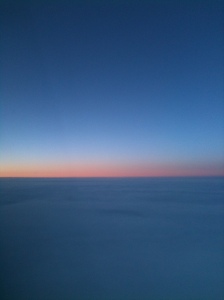 (Thanks for everything, family. My heart to you.)

2 thoughts on “Weather and View from Here:Variable but Fair”