First off, you should know I have very poor vision when uncorrected. As a kid it didn’t matter that I couldn’t see in the dark when I got up at night. I had long ago learned how to  maneuver and survive despite being unable to identify whether things were animal, mineral or vegetable when farther than a couple feet away. My first glasses in second grade brought everything into such vivid focus that it was like living two different lives. One was softly blurred, a lovely impressionistic view, less than practical or safe perhaps, but it was what I knew. The other was clear, sharp, crammed with faces, objects and movement that at times seemed glorious, at times harsh.

So when I got my new glasses today, I wasn’t expecting much news, and no miracles. These are the ones I put on when I am finally ensconced in bed with a great book and have taken my contact lenses out. I have worn hard lenses successfully for over forty years, but my eyes blink with relief as I place my night-time “eyes” on.

At the vision clinic, I tried the plain but expensive new trifocals on. The technician’s assurance included a guarantee that all would be made visible in a new way. My near, middle and far distance vision would be dramatically clarified. They were, after all, progressive lenses. I wondered if that actually referred to the aging process. I made a good-natured but skeptical noise, a light grunt, and tried them on.

The technician, Tom, was right. I saw differently. If I swung my head too quickly it felt a bit like I was on a boat. If I followed his instructions, I could see, incrementally, quite well by shifting my eyes from top, middle, bottom of the lenses rather than moving my whole head. It would take getting used to, but I was using them in limited doses.

It brought to mind the other major vision wear change in my life. I was fourteen when I finally persuaded my parents to buy me contacts. What a difference to not have my trusty glasses on! I could see everything without worrying about glasses falling off, getting scratched, or drawing attention to myself. Seemed a bit full circle to seek real glasses again.

We chatted a bit as he made minor adjustments. Tom was a friendly guy, interested in what I did for a living. I explained I spend a lot of time with people but also at computers, both for my paid work and my unpaid work as a writer. That lit him up. He told me a story about working in Alaska.

According to Tom, an ordinary-looking man came in for new glasses. He stated he was rather poor and wanted only the most basic eyewear. The patient was a writer and was doing research on his own dime while in the state. They talked a bit more; the man left. Tom looked at the order information more closely. Last name, Michener, first name, James. When Michener picked up the glasses, Tom admitted he knew who he was. Well, Michener shared, he was working on a new book and he was swamped getting the facts for his fiction. It was much easier being anonymous. He was pleasant and left swiftly. A couple of years later Tom got a package from James Michener. It was the new book, Alaska, and inside was an inscription just for Tom.

“So, in case you publish your novel, remember me. I’d like to read it and say I met you.”

I laughed and turned to go when he stopped me.

“You know, I write about fifteen minutes a day, too. I like to get my thoughts down, my ideas out. Sometimes I write a poem. It makes difference to me; I understand things better.”

I thought about the exchange on my way home, how Michener, Tom and I had something in common. We all needed to put pen to paper, or fingers to keyboard. The human population has a long history of writing down their thoughts, in private journals or for public view. An author of celebrated books needed to quietly investigate and record information for his book before sharing it with the world. He integrated his desire to illuminate reality with a need to embellish it. There are always stories within stories that carry a writer forward. Even, perhaps, Tom with his daily fifteen minutes of scribbling away.

I can relate to this process. It has been a part of my whole life. For most of my youth I kept diaries. Since writing snagged me as soon as I could form words with crayon or pencil, it was not just a fun aside. It became a ritual. I had a key that unlocked the leather mini-books in which I put down what was most important. It might be nothing more than stating the daffodils came up. It most assuredly contained the details of my first love. But it felt good to take note of things. Give form to feeling. Make more real what was unspoken.

As I got older, it wasn’t much different. In between research papers, poems, plays and short stories, I kept thick journals. My mother told me, “Write all you want, but be careful what you write about.” That was what keys or good hiding places were for, I figured. It was my intention to write the truth as I saw it–that is, when I wasn’t writing fiction and even then… how else was I going to get the whole picture, solve problems, give breath to new ideas? Writing everything down gave me unfettered freedom.

For about thirty-five years I kept complicated narratives of my life and the times in journals. They didn’t, for the most part, have locks and I rarely hid them. But they started to feel like clutter. Like extra weight. I had dedicated myself to near-daily examining of life’s workings, recording my highs and lows, memorializing people I met even in passing. I was writing other things but maybe not enough. It had been useful to journal, once. I now felt exhausted by all those self-centered thoughts.

One day at around forty I looked at the many boxes of journals accumulated over the years and moved from place to place and thought: to the dump. That was where they belonged. What was I saving them for? My life was being lived. Stories and poems, not journals, were important to me. I needed to record inspirations, clues and data about a work in progress, no matter how humble.

And that was it. They were simply gone. It felt divine. I have no written record of my life. At least not in any journals. Because although I understand Tom’s desire to write down his thoughts each day, something else still calls me. It is the passion to turn the details of fascinating lives that are lived within my view, as well as the hidden parts of my own reality, into a larger, crystallized whole. Something broader and deeper. More truthful. Writing is entering vast and hallowed grounds for me, even as I claw through murk and zig-zag under threatening skies on my way to finding one good line. It is one of the times in my life when I know exactly who and where I am. And it sheds light on what could be–either in fantasy or fact.

So, thanks, Tom, for the good glasses and talk. My vision matters a great deal to me, both internal and external. I am seeing better again already. 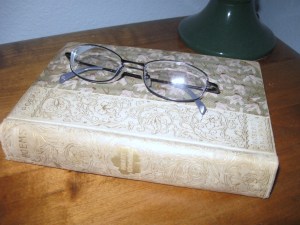 4 thoughts on “The Fantasy and Facts of a Life: Seeing the Truth”