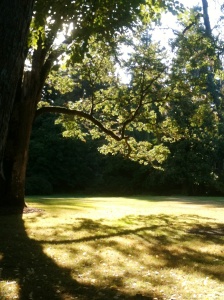 It was later than she planned on waiting, but still she walked the grounds and watched the periphery of the garden. Lena was in the thick of it, both the grounds themselves and history. She languished in the former more easily. This place was her solace, being out-of-doors and finding small beauties, even a homely leaf resting on the surface of a pond. The great oaks were vibrant beings, their branches entreating sky and earth.

The estate had been left to her a year ago, but she only came on week-ends when the flat began to pinch her with its abominable smallness. The city preferred she stay there and since she was newly rooted here, it was best. She was welcomed just as a writer at an arts publication. They did not know the rest, who her family was yet. How she dreaded those “yets”.

The light unspooled over the lawn in a wide arc. Shadows drew her with a waft of coolness. She leaned against a tree, rough bark hard against her backbone like a warning. Where was Thaddeus, her brother, generally an opposing force of nature? It was like him to keep her waiting, chose this day when the sun was full of power, nowhere to hide. Of course Lena could go inside but that required three keys and discussion with Randall II, the stooped but demanding caretaker. He would have questions, he always had questions and needs, as well he ought. He had watched over Great-aunt Lidia’s home for forty-two years. Randall knew the manse and gardens better than any one else, anymore. It was up to Lena to learn more, she agreed. It was all the sorting and tending that had deterred her from a full commitment. Yet if it used up her time and stripped her peace what was the point of this ecstasy she felt with one sweeping gaze? Paradise is what it was. Safety. She wished Lidia had stayed a little longer, told her more about the family’s legacy and lies.

It was not good that Thad had called, demanding she meet him. He would find her on the lawn, near the great tree, where the bench awaited, as was their usual spot. When had Lena last spoken with him? Four months ago, six? He was always abroad, meeting with someone or other from the diamond industry, talking business and making deals, checking interests. Basking on boats with lanky bronzed women who knew little of the value of a coin or the charity they reaped so carelessly from her brother. Thad had a lukewarm interest in Lena’s work. He had once berated her for asserting her need to make her mark. That had been done for her by the family, he informed her levelly; all she had to do was get involved in the business, do her duty. She had left her place on the board two years ago. Instead she strove to become a freelance journalist though making, as he pointed out, an uneven income. What did that matter, she laughed. It wasn’t ever money; it was curiosity and even a small promise of love that drove her.

Thaddeus never knew what to make of her, nor she, him. Well, he was their father’s son in most regards and that was not bad, only righteously bound to work and inaccessible. She was her mother’s daughter…well, one said so even when one suspected otherwise. And Lena was fearful that Thad might state his suspicions now that she had inherited this place. Proof that she was the daughter of opera singer Helvetia Simonson of San Francisco. Yes, that was the woman she knew about; Great-aunt Lidia had made it a point of pride to clarify details others disregarded or denied. 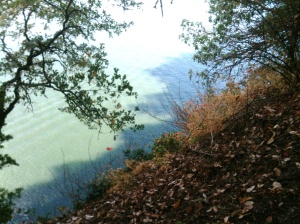 The shadows lengthened quickly. She checked her timepiece. It was soon dinner hour and she supposed Randall would need to be seen. She saw him enter the back door, impatient with her as she awaited Thad. A good man, a paragon of efficiency, dear Randall II was so-called because Lidia’s parents had employed his father. Lena recalled when she came each summer. He’d welcomed her with a smart bow, a pat on her head, then let her go as he gathered her things. The river shone past the grounds like a teal ribbon; she would run there first. Then the pathways that wound around the acreage, the ponds and stream, flowers swaying toward her. She was happy here. It had saved her, this freedom protected by orderliness.

Lena saw Thad round the corner of the house. He was striding toward her, and in his hands was a flat leather envelope that she knew carried more information than she wanted to know. She backed into the trees and hid. The lawn was striped with shadows; it separated them still. A sharp intake of breath as Thad stopped not fifty feet from her and turned a slow circle.

“I know you are there as Randall told me. You need to show yourself. I don’t have time to play games.”

Lena stepped forward as he turned his back. She ran to the path that led down to the riverfront and kept running, her bare feet stung by stones, her legs hindered by her skirts. He was not going to stop her. He must not threaten to take Elderberry House from her. His thirty-seven years seemed ancient to her twenty-four and she felt his power as she had her father’s: worldly, driven, final.

But it was too late. Thad cut her off and she stumbled into his outstretched arms, fell upon his tweedy jacket. The angry tears escaped before she could stop them but as she began to protest he held her close.

“It’s alright, Lena! I know! You can stop hiding now. Your mother wrote us and she is coming to visit us. Helvetia Simonson, who would have thought her? Amazing voice! I suspected for years, then father let something slip when we met in Switzerland, the miserable….well, he is our father despite his failings….We must simply move on.”

Lena sat on the ground, pushing from her face the mass of unruly yellow hair, so unlike Thad’s dark brown. He reclined beside her. She could not speak. It had been like a breath held in for her entire life and now all she could do was let it out in jagged, soft sighs. Thad twisted a stem of lady’s slippers and placed it in her hair and she lay her hand on his shoulder. It was a start, perhaps a kinder one. Something she might write about one day. 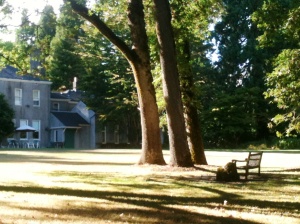