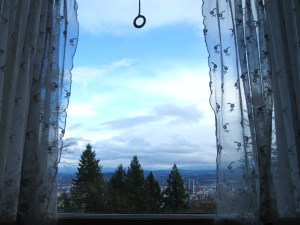 I am often jolted from sleep, words blazing in my brain, sometimes whole phrases or poems that demand their places in my notebook. I obey, lest they slip away to the vast hinterland of dreaming once more. I hope they will stay in place on paper, releasing me so I can return to rest, but they often pursue me until given the gift of freedom. Which means: a life to call their own. This ultimately requires my attention in the waking life. The day has begun and I am glad of it.

But this morning was the sort of re-entry into daily life that I would rather avoid. I rose from murky consciousness toward a sheerness of wakefulness as sunlight tried to illuminate my thinking. My eyes remained closed against the morning as a weightiness threatened to hold me hostage. Unbidden words passed through the darkness under my eyelids: The music is over; your voice was lost. Too much means less and less. Travelling alone without one good compass ends good journeys. Who can even see your footsteps upon the earth?

All the things I don’t like and who among us would? Uncertainty, the remnants of loss, weariness, old hurts that reconvene like a war council. Unease remained as I pushed out memories that can still haunt me, the times when problems didn’t resolve despite earnest effort. The errors of judgment that hollowed out places where defeat still can burrow. I called on God of all, of east, west, north and south, God within and without, Jesus who finds and comforts me, reminds me of revolutionary love.

Capture all old tears and bring them back to me as shining orbs. Set me straight. Let me see again, a woman without misgiving.

My eyelids flickered and the room in its blueness came forward. The variety of pictures greeted me. Morning was grounded as light slipped over my hands and feet. I let the scattered threats fly away. But not before one more word lodged itself where the others had lain in wait.

Fealty. I knew the word from somewhere. Fealty. Didn’t it have something to do with truth? Or…money?

It presented itself many times as I prepared for the day. With a fragrant mug of tea beside me, I picked up The American Heritage Dictionary. I opened the volume.It was there, the word, right on the page before me. Out of all the pages that might have been interesting to read first, the dictionary opened to this page.

I read the first meanings: “1. a. The loyalty of a vassal to his feudal lord. b. The obligation of such loyalty.” I immediately recalled watching an historical drama, “The White Queen”, the previous night and believed I heard the word there. But, wait, a second meaning: “2. Faithfulness; allegiance.”

I sat back, held the mug between both hands and sipped. The words ran through me. Spoke to me. What am I faithful to? What loyalties means the most  and what am I called to do? Where is the allegiance that matters no matter what? My family, yes, of course, and friends. Then, as though unearthed from beneath the unwanted sourness, came this: Divine Love. Compassion and the causes of mercy and enduring hope. Celebration of all that the Creator gave us. And this fierce passion to write.

How foolish I can be, a small soul making my way through the unbearable and marvelous phantasmagoria of life. Fortunately I am still teachable.

This is the life I most care about, the one I choose. This morning began as a puzzle tossed into disarray, then reassembled in one swift movement. The day and my place in it came together again. I have my  compass. I have notebook and pen. A guiding Hand, an angel, a sudden crack in the dark that allows the right clues admittance to my heart.