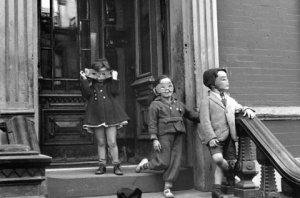 I remember the library was shadowy and spacious, with books towering above us that could only be reached by a ladder. We had gone there with my parents. It was soon to be Halloween, and Aunt Iris told them the streets of Detroit were more unsafe than most in the world. Devils’ Night was an occurrence we must avoid, she told us with a warning frown. Mother was convinced after only two days in the city, having heard and seen things she didn’t relay to us.

Father had to fly there for work, mother said, a most important trip, so he’d brought her and us two kids. Everything he did was important, I thought, but the trip was a surprise, an exciting event for Mallory, barely five and me, six-going-on-seven. I liked planes and she didn’t, but we both loved Aunt Iris and Uncle Henry, our cousin Susan, a baby at four, and the big brick house they lived in. It was a whole other world. The thing I didn’t like was that we wouldn’t be trick or treating out in our small town neighborhood. I had planned on being a monster, a hairy one.

The lace curtains in their library intrigued me. Our living room had heavy green curtains; we didn’t have a real library. When I touched the white material it felt frail; I was afraid it might crush or crumble in my hands. I had been waiting for Susan and Mal. They were playing dress up and called to me a few times from the stairway but I wanted to touch the leather spines of the books and twirl the big globe by Uncle Henry’s desk. The world was so big I couldn’t believe it all fit on that smooth, glossy ball. Glass and brass objects–a small tray, a swan, a horse and a fancy box–sat on stacks of magazines and letters. There were plants bigger than me in the deep corners. I thought they would be happier outdoors with the huge old trees.

“Lucas, come on! Upstairs!” Mal yelled again, then laughed with our cousin.

I heard my mother tell her to keep it down. I left the library with a backward glance, seeing dust spin in streams of light and each book waiting for me to be a better reader. A lot better.

Aunt Iris met me in the hallway. “Go on, Lucas. They’re trying on costumes. You won’t go trick or treating but you can have fun playing. We’ll have candies and a roaring fire and spooky stories later.”

I was disappointed as it was the first I’d heard that we had to stay in all night. But she was my favorite aunt and I knew she told good stories at bedtime. Mother said she had been an actress on stage.

Up the many stairs–I quit counting at twenty–and down the narrow hall and around the corner, to the third large bedroom where the door was open. There they were. They had Aunt Iris’ scarves out, using them like skirts or long hair. But they also had hats, ties, vests, feathers, dresses, capes and jackets, jewelry and more. Some things were fancy, probably from my aunt’s plays. There were animal heads made of cloth, a donkey, raccoon and pig. The raccoon was especially good so I put it on and liked how it looked. I could see pretty well, and scampered around a bit.

Susan had gone into the adjoining bathroom to try on make up. My sister watched me, eyebrows raised, as she refashioned a silky gold and blue scarf into a dress. She was happy, humming to herself; she knew what I was about to do. I hid behind the free-standing, full-length mirror. When Susan came out and admired her reflection I jumped out with hands raised high, fingers crooked like claws, and roared my best. I didn’t know what sounds raccoons made but it was effective, anyway. She screamed long enough that my eardrums hurt and mother and Aunt Iris came up. I had to take it off and remind her who I was while our mothers stood laughing in the hallway. Mal looked a mess with ruby-red color smeared on her lips and cheeks but I gave her a hug so she’d stop sniffling.

We had dinner in the long, chilly dining room, father back again and happy, everyone chatting except for us bored kids.  The rolls and roast beef were good. Afterwards as the adults left for the living room, we asked to go out on the porch, or stoop as they called it there. Since they would be close by it was decided we could for ten minutes if the door was left open a crack.

It was a lot longer than ten minutes and it was good to be in open air, pollution and all. Good ole Mal had stuffed little masks in her coast pocket, so we put them on and stood watching passersby and cars. Some people waved at us or smiled. We weren’t very impressive, I’m sure. A few called out a “Happy Halloween” which made me miss my best friend and costumes left at home. I leaned against the bannister while the girls fidgeted with their masks and chattered about who knows what. The sun was going down a little, the blue sky brushed soft pink and orange above the skyline. Detroit was enormous, big enough to make its own wall map. It made me a little nervous thinking about that but going inside did not seem interesting yet.

I was just staring out at the city’s lights like specks in the landscape, when I thought I saw a sudden brightness, a flare above a bunch of buildings. I called the girls over and pointed to the area I had seen it. They hung on to me. Something brilliant flashed again and then, a few buildings over, again. And then the brightness grew and grew, and another area brightened and pulsed. Gradually I figured out what it was, dread creeping up inside me.

The city was catching fire, just as the sun–a huge ball of exploding, flammable stuff, hotter than heck, I knew that much–was putting itself away for the night. The sky glowed fierce orange.

We stood riveted, waiting for grown ups to notice, too. A man  running past stopped and stared in the same direction, then told us we should get inside and where were our parents, anyway? Susan whimpered a little as Mal and I wondered where all the firemen were and what might happen next. Mal took my hand.

Father and Uncle Henry flung the door wide and my uncle shepherded us in, but Dad hung back a few seconds surveying the city. His face looked stern. I swear there was firelight on his skin.

W gathered in the living room where a fireplace harbored another fire, a cheery glow that danced and threw off warmth. I went to a big window and looked out, absorbed by the twilight being slashed by red, orange and yellow, a terrible and beautiful light show taking over parts of the city. I could hear the adults talk about Devils’ Night, damage done, craziness stirred up. Who would do such things? What did those fires really mean? I wondered who was out there right then, on the streets with danger on their minds and was grateful for the big door with all the locks, our grown ups sipping coffee and eating cookies nearby.

But it was still a sight to remember, a wild night like none other even from the window of my aunt’s and uncle’s house by one of the Great Lakes. I had something fantastic to tell my friends. And that was before treats and ghost stories Aunt Iris told us, making the hairs stand up on the backs of our necks. After I finally fell asleep my dreams were haunted by little beasties slinking from the library walls and fire eating up the fancy curtains. It was a relief to wake up to fresh cinnamon buns and eggs, my cousin and sister ready for more mischief of a minor sort.

I found out years later that during that trip our father was given the opportunity for a great job in Detroit and he’d decided against it. I was caught off guard; it wasn’t often he talked so openly.

He leaned forward and spoke confidentially. “That night it all changed, seeing things from the stoop with you kids. I had been offered a big job in a big town, Lucas. But I realized what I wanted for us in the end was something more steady and quiet, something that wouldn’t burst into flames so easily. Life would throw enough surprises and shocks at you. I wanted to buy a little more time.”

I thought about how much he loved us and what I would have done if it had been me. I might have taken the job; I’m a risk taker. But I had to tell him it was the most peculiar and memorable Halloween of my childhood. I thanked him for that, and our safe return home.

(The photo prompt is from Patricia Ann McNair’s blog. Thanks as always, Patricia.)