It peeked out from the mail pile like a lost missive, a thing out of time like a telegram. Who wrote longhand anymore? It belonged to a woman, perhaps. She studied the letter a good long moment, then slit the sturdy flap with her jeweled letter opener. It annoyed her that her hands trembled but this was no ordinary communique. Regina couldn’t read it yet. She sat on the bench by the door and closed her eyes.

Kat and Frederick, who all knew and touted as Derick the Great or just Derry then, had moved after they’d married. All the way to New York, upstate as evidenced by the postmark. Regina had been glad of their exodus, so relieved that she had thrown a small but lively party, inviting all the people she liked best. She didn’t say why she was cooking Cornish hens for eight at eight; she didn’t have to. They drank a lot of wine and danced to music that each person brought, then sank into the sofa and chairs, quiet. Regina didn’t whine or snivel and make a scene. The gathering was too good for that. But they saw that Derry’s photo was turned face down on the mantel, his small bird paintings studies removed from the wall between the windows. When everyone slunk out, smiles drooping, Regina changed into her pine green fleece robe and stoked the fire. There was nothing too wonderful left, she had thought. There were only days of stressful, possibly meaningless work. And nights that hit her like an anvil upon flimsy silver.

He didn’t write but once, a long year after the move, a brief email that told her he had found a better job, a curator position. All  because of the recommendations she’d slipped him at Kat and his wedding.

Derry had worked with Regina at the Montblanc Gallery for over a year before they became more than friends. Then, fireworks that ended with a jackknife dive into love. When he wrote, she’d deliberated for days what to say, how to stay neutral, how to not feel as though she was being mauled by a cougar again in the middle of a wasteland. She changed her email address.

After that, she felt better. It showed her she was strong enough to avoid his reach or better: she no longer felt compelled to love him. It was a choice to say “yes” when you know it has to be “no” and she had a strong will. Regina was not going to let it soften and fail when the man did not even live within her orbit any more. Did not need her now. He had Kat, his childhood buddy. She was rather high-handed, a reasonably decent patron of the arts and became his most adoring wife. They had made a pact as children, he’d told Regina once, but never did he expect her to show up and finally make good on it. Nor did Derry expect to be torn between two women so different that it made his want to split into two men.

She had just had dinner with him, so unsuspecting had she been. But he’d brought here there to tell her about this decision: engagement to Kat.

She cleared her throat to avoid choking. “You chose a well-trained, sweet little creature when you could have had a wild girl, a changeling sort that you seem to like a lot, a crazy adventure that could still take you to the edges of mind and body and bring you back howling and happy. You could have had me and we might have made all things possible.”

She put her fork down very slowly.

He’d studied his red napkin squashed beside a silver-rimmed plate. Derry had splurged on her with great food before rotten news.

“Yes, I know, I know. I know! But Kat and I want other things–they make good sense to me. They add up to a life that’s familiar and solid and that’s good, too. Different than what you and I’ve had but still good!”

“But better? Better than us?” she’d asked, the words verging on a harpy’s screech.

She could feel diners glance at her as she stood up. She pushed her chair back under the table with a delicate movement, patience and kindness registering on her exotic–that’s what Derry said–now sadly uneven features. Regina decided that moment that he just didn’t have what it took, the verve, the spontaneity, the capacity for the sort of love she had to share. It helped her to leave the plush room and him without shedding a tear or stumbling, without leaving a mess.

After the wedding, to which she’d RSVPed “that’s a negative”, she’d waited on the church steps behind a few of their friends. She could almost touch him as the photographer took a hundred pictures to immortalize his decision. He was surprised to see her but Kat didn’t even register her presence

“Reggie,” he said, although he didn’t say it aloud, just shaped her nickname.

She’d reached forward and gave him an envelope which enclosed her letter of recommendation for further gallery or museum work, or whatever he felt utterly sensible. And then she left her heart teetering on a ledge somewhere she couldn’t name. She thought she might scream but it dissipated as she drove the long way home, past woods and the river path they’d walked and the osprey nest.

Regina watched tree branch shadows interrupt the stream of light that fell on her feet. The letter felt cold in her hands. She took it to the dining room table so she could lean on it, then opened it before it froze in her shaking fingers. She’d not stop until she was done.

It has been a long while since we have communicated–three years, is it?–and I am compelled to reach out. I am hoping you will see fit to read the entirety of this; it isn’t long and I get to the point now.

Frederick is ill. In fact, he’s more than ill, he’s become heartsick…a respiratory infection visited its wrath upon him two months ago, but he recovered eventually.

No. It’s you, Regina, that’s stymied his return to a full and happy life, and so, I am asking you this one favor now.

He is not creating work anymore. He must have your counsel, needs your great hope in him. He won’t listen to me, says I don’t understand. Please come and see him. Show him he can paint again. Convince him he is worth more than a good paycheck. Explain that he’s just lost his way like artists can and do sometimes–you know how it is, but I do not! I so hope you can find the compassion to come, to remind him of his true nature.

I will be forever indebted to you for this. I know it will be hard for you. He has too much pride to ask for you but he needs you before he falls into further despair. I will fly you out as soon as you can come.

She walked around the living room, into the kitchen where she got a glass of water, then circled back to the letter and picked it up and read the last two paragraphs. She went to her desk and took out a pen and paper with a grey and burgundy chevron design on the edges.

Derick/Frederick, known to we who know you as Derry!

Get ready because I’m coming. You just hit a nasty snag. I’ll give you three days to pick up that paint brush and make one stroke on paper or canvas. After that you’re on your own in the great wide wilderness. We all have to test our survival skills sooner or later. Ultimately, alone–but luckily I’m offering absolutely free assistance this one time. Consider it a delayed wedding gift.

She tore Kat’s careful letter in half. Kat had Derick and far better handwriting but she, Regina, had some moxie and forgiveness. She could possibly be an urban warrior of the heart. She went to the hall closet and reached behind her coats until her fingers found Derry’s two small bird paintings. Two ospreys in flight and a heron at watch over the river. Regina thought it time to give them back their spot on the bare wall. 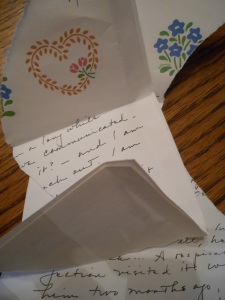 2 thoughts on “A Letter from the Hinterlands”