When I got home there was only one velvety, paisley-swirled black glove stuffed in my pocket. Surprise followed by consternation: how can this be? I took them off a brief time, perhaps five blocks out of three times as many during an hour’s walk. Although there was a cold drizzle developing, I immediately started out in search of a right-handed glove. The rain cooled my resolve after three blocks.

Earlier I had been taking photographs as often happens when walking in our historic neighborhood. There are wonders to capture and to use the camera at least one glove is removed. And I am digit-clad two-thirds of the year even in the temperate Pacific Northwest. I have Reynaud’s, a circulatory disorder that equates very cold and painful hands in temperatures below fifty-five degrees. It is a challenge to find the right gloves: comfortable, not cumbersome,  passably attractive. I’ve bought all sorts of gloves; leather insulated gloves are good but pricey. These latest gloves are a cut above.

Last fall I’d talked my husband into a getaway week-end at an oceanside town, Cannon Beach. Marc had been long overworked (we’re talking seventy hour work weeks) and needed more than two days to rejuvenate but was happy to get there. The condo was  replete with fireplace and located a block from the ocean and a short walk to unique shops and restaurants. As we walked the length of sandy beach, the wind was more wintry. Despite living in Oregon for over twenty years I had brought inadequate gloves. I decided to shop.

The merchandise can be expensive there. Browsing, I tried on a fluffy fake fur jacket that was cozy, chic, pricey. My husband raised his eyebrows and we laughed. I am more a Land’s End sort of gal since I love being outside. And dressing up went by the wayside when I stopped working.

Then I saw the gloves.

There were only four pairs: purple, black herringbone with red trim, brown and black with a silver paisley pattern. I picked up the paisley gloves. They were insulated and warm. They were soft and plush velour, the closest to velvet I had felt since I bought real velvet dress slacks over ten years ago. In short, they were a little fancy, very practical, costly for something synthetic but, all in all, perfect. We agreed: “A little pizzazz.”

Maybe we both needed a  lift. That week-end was a slow-as-molasses time, freed of the tentacles of stress. Hikes in the sun-illumined chill of autumn, dinners at a homey restaurant, late mornings sipping coffee as we read and chatted, and nights eased with firelight. It made a difference, and those unique, supremely useful gloves did their job during coastal explorations.

So I had to find the lost one. I got my car and started back down the route I’d taken. Since it was comprised of quieter residential streets, I drove at tortoise pace, peering at wet sidewalks, grassy areas and the streets. It was getting darker. Frustration crimped my shoulders as I cruised one block after another, recollecting where I may have used my camera. How was it that I lost so many things? Some say pixies are to blame…I say it’s my carelessness or a true mystery.

Tears threatened to flow. I know, tears for a glove? I have written before about both my ordinary and beautiful possessions, lamenting how often they get broken or misplaced. The real kicker is that I am an excellent finder of things for others. But I have acknowledged that I may like my things a bit too much. I don’t own a lot of expensive objects. My home is comfortable but humble. So those I appreciate greatly, like most people, I value. Ultimately, though, I view possessions as a challenge spiritually and emotionally. I do work at rising above. But listen: since Thanksgiving I have lost one earring each of three pairs I loved (one pair, a Christmas gift) and two more hand crafted mugs have lost their handles. A plate my mother gave me was broken and tossed without my knowledge; a grandchild was worried I’d be mad and sad. Yes, just things.

I kept driving and more than half traversed the familiar streets. I saw a road crew worker at a corner and then it hit me.  This was a block I’d paused for a couple more photos. I glanced to my right and squinted at a dark little heap, did a U-turn. The worker watched me as I parked on the wrong side of the street. Jumping out, I crept up to what could have been a dead creature. Unbelieving, I gasped and grabbed it’s damp, tumbled form. Turned to the woman and waved my glove wildly at her.

“Found my lost glove! My favorite ones! Isn’t that great?”

She waved right back. “Good for you! Lucky day!”

Was it luck? Some things vanish, never to be found again. Were those dratted pixies playing games? More likely, my determination to not lose one thing more (for now) guided me to that spot. And after all, I’d only been gone about twenty-five minutes; it couldn’t have crawled off by itself. Still. Those finger warming, heartwarming gloves meant something –that excellent beach trip, the efficient way they ease my suffering hands. That silly silver paisley, so soft. It just had to be one happy ending. 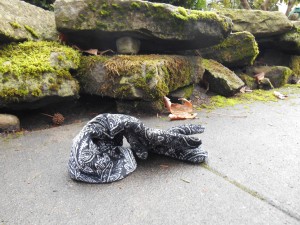 10 thoughts on “Case of the Velvety Glove”