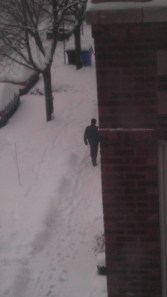 No one else was out. It was his lucky break. All week he’d had something he’d tried to avoid. He’d felt a rumbling of imbalance before it grabbed him by the neck. He never got sick, mentally or  physically. Even if he had days, okay occasional weeks, of feeling stunned by the varieties of life’s misery, he called it a “rough patch.” Not “the blues” or “bad karma” or “the end of all good things” like his work buddy explained his depression. There was no end of things, period, or life, until it was over. And Billy was patient; if he kept enough around, almost anything got better. Or changed.

It had lasted four days, aches that made him wince and wicked tiredness that kept him home from work. Then he came back with a mind like a clear blue sky and strength returned full force. He saw on the television it had been snowing. The street view from his window confirmed it. He wasn’t surprised. The thick quietness of snow brought a smile to his pockmarked, angular face. It wasn’t blizzardy, but everyone kept to themselves when steps and car roofs were covered. Except for Billy. He’d grown up in snowdrifts and it was second nature to be right out in it. What was the town going to do, hibernate until a spring thaw?

He’d gotten dressed for a walk despite his wife, languishing in the chair as always, objecting.

“What’re you doing? You were sick yesterday and now I’m feeling it. I can’t have you relapsing and laid up again. Heavy snow.”

He’d glanced her way as he yanked on motorcycle boots. She was wrapped in the blanket he had just left, her slippered feet on the coffee table now that his empty mug and soup bowl were gone. Her hair wound down her shoulders, unkempt.  It had been unattended too long because he had been too ill to help her. Whereas she was always sick, with multiple sclerosis. Some days she could barely lift her arms, and brushing all that hair felt like trying to climb Mt. Hood, she admitted. Why not cut it?, he’d asked more than once, but she ignored him.

“I’m off to get some fresh air. I feel fine now. Anything you want?”

He’d moved to the door, then paused.

“Chicken soup and tuna fish.” She sighed as though reciting the list was a chore.

Billy pulled his wool cap on when nothing else was noted and left.

That first step out was a swift slap in the face and he whooped loudly. The sweetness of the air was greater due to the cold. It’s whiteness illuminated the street. He felt everything got shined up when it snowed. He expected to feel even stronger after he walked the two blocks to the convenience store and back. Healing, the winter. Spring was a riot of newness that made him dizzy. Summer was too hot on his skin, but autumn was like a ride into paradise with a promise of the best to come. Winter.

Billy expected to see someone out with a dog, but the squeak of snow beneath his feet was unaccompanied. There were two snow people across the street, half-dressed, which he found funny. On the top of the hill was a snow fort about two feet tall. Abandoned snowballs. Kids were probably called in for dinner. He picked one up and threw it hard across the street. It hit a brick building, a soft thwap in the stillness. He scooped up more– it was good packing snow–and made a little ball, then tucked it in his pocket. 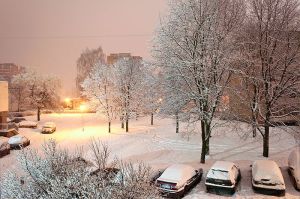 The tree branches moaned and creaked. They were dressed up in white like ermine, as if to shield their bark from cutting wind. The twilit sky was hosting more galaxies. His breath singed his lungs on its way back in. Billy was glad he’d let his bread grow back, even if his wife didn’t love it. Where he came from, a man without a beard was not quite a man. He knew better but winter and beards were made for each other.

Icicles sprang out in a streetlamp’s glow like fine sharp teeth of the abominable snowman. He stood beneath a row that hung off a windowsill and had the impulse to break one off, brandish it like a sword. He reached up and couldn’t quite grab it, so jumped a couple times,  grazing the sharp tips. An old woman appeared from behind a curtain and shook her finger at him. Billy made like surrendering, hands raised palms up. She grinned at him, all six teeth showing. He slid across the street, boots slicker now. What he wouldn’t give for a sled. His beat-up old toboggan that was sold for ten bucks when his family sold the cabin twenty years ago. Or the cross country skis for distant mountain trails that he put away when his wife got sicker.

By the time he reached the second corner, Billy felt better, just as he expected. The Curb ‘n Corner was all lit up. He pushed open the door and heard the chime go off. He could see the back of the owner as she restocked down the first aisle. He found a basket and filled it with the things he needed. At the back of the store, he deliberated on root beer or ginger ale and took two bottles of the second. His wife might need these if she got sick. Before the refrigerator door slammed shut he got a root beer for himself.

“Well, well,” she said as he stood before her.

She was tall and thin like a strong reed, he thought, in that grass- green uniform. It made her eyes almost turquoise. She leaned forward, palms pressed on the beige, ink-marred surface. “Where you been lately, good-lookin’?”

He took out the groceries and passed them to her hands.

“I see that. You snugged up to trudge out in this? Like a polar bear, Billy. For soda and tuna? Just makes me long for a piece of that perfect Hawaiian sunshine. But I knew it would come to this mess.”

Billy chuckled. “I know, you’re too soft for it but you gotta look for the best, Amelia.”

“Your fault. You ordered it. You told me it was comin’ but I held onto hope.”

After she finished ringing him up she put hands on hips and flashed him that mile-wide smile. It had the effect of turning the grimy, dull surroundings into a place worth inhabiting. She counted his change slowly then put bills and coins into his hand with a slap.

He said nothing as he set down the money but then grabbed her fingers, pulled the snowball from his pocket and lay it in her hand. A foolish, freezing gift.

She looked aghast and then laughed, tossing it back at him, a little melting clod of white.

“You sneaky devil! I told everybody–that Billy Cook, he said last week, ‘Bound to snow, Amelia, bound to snow good‘ and they said ‘Billy Cook’s a wild man escaped from his true element and he sure knows signs of weather. Like you’re an expert.”

He made a horrified face. “They didn’t say I was a wild man, did they?”

She threw her head back and laughed, chest bouncing, florescent light bathing her face and neck as though it was tropical sun shining down on her alone.

“Yes, but Billy, they also said you was a good man, crazy good. Now get on out of here before your head swells and so I can work.”

He stood still and the words he never said wanted to come out, but he snatched a peppermint from glass ashtray and grabbed his bag.

He left, chime going off, the light dimming. When he crossed to the corner and turned back she was still looking at him. He waved at her but she just stared out until he thought she couldn’t possibly see him in the thickening dark. But he felt her thoughts and his brush like wings in the night, then fly off.

The walk home was shorter, his strides longer. He didn’t have time to play. Tea had to be made. Then he’d wash Erin’s hair if she was up to it. Tomorrow, work, but he smelled new snow on the way. 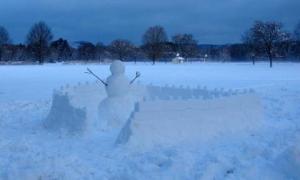