The place was overtaken by ceramic Siamese cats. They showed off their glossy pale coats, peered into the room with icy eyes, and lorded their eminence over anyone who set foot in the room. Everywhere Clementine looked, they seemed accusatory, as if they knew her reasons for climbing the stairs with leaden feet. She’d had to ring an outside buzzer to get in the building, like it was a secret society up there. What did you call a fortune teller’s work? A consulting business? A fool’s paradise?

It was attractive once she let herself in. Elegant, in fact, which was surprising considering the neighborhood, fraught with wandering souls and greasy eateries.  She ignored the cats and focused on a wall of pink, blue and gold floral wallpaper, two large mirrors that caused wintry light to gather and flash across the floor and her lap. Everything was prettified and hearkened from early or mid-twentieth century. Even the phone was rotary, made for someone who wore high-heeled satin slippers upon awakening. Clementine was drawn to a dish holding heart-shaped cookies. Were they supposed to encourage a placid, appreciative expectancy in customers?

Her eyes lingered on things despite her intention, which was to await her appointment patiently, to breathe slowly. Keep her mission in the fore of her mind. How could she prepare and present her thoughts intelligently when everything gleamed and bloomed without mercy?

When the private door swung open, she would enter the office (or would it be a room shrouded in voluminous drapes and darkness?) and take a seat confidently. Say she’d been passing by, saw the little, calligraphic sign by the door and determined to call Madame Valencia on a lark.  And she would be frank, tell her that she didn’t believe in this sort of thing, but for twenty-five dollars maybe she could tell her something good. Something so visionary that she would leave with a renewed sense of purpose. An epiphany, against the odds. She snickered softly. Wouldn’t that cost more?

Maybe that would be too much to say, on second thought.

Clem studied the perfect arrangement of heart-shaped cookies. She picked up a red one and cradled it in her palm. Her fingers trembled. The oxygen felt as though it had leaked out of the room; the warmth was oppressive. There stood eternally blooming flowers, Siamese cats like sentries. If they were real they likely would size her up as an impostor but it should have been their mistress they inventoried. Or maybe they would be trained to think of Madame as “Highness.” If they could only purr, they might leap upon the rung and twitch their tails against her ankles, make an effort to be more welcoming. Ease the mean ache burrowing between her ribs, the reason she was here. Really, she should just leave this silly place.

Clem covered her eyes but that did nothing to stop the years from rewinding: she is again at the art museum, waiting two hours for him, studying Monet and then Gauguin. After an hour moving on to the fifteenth century tapestries that she admires most of all. He knows where to look. Though he would like contemporary exhibits, he accommodates her tastes. But this time he is too late, and Clementine has gone to the mezzanine that overlooks the first floor. Scanning the sparse crowd, she thinks she recognizes his olive trench coat, his sandy hair, but it can’t be. This man is leaning toward a woman in a navy blue cape and high heeled boots as though imparting important information. His hand is on her shoulder. Clementine is about to call out and wave when the woman looks up anxiously. The woman freezes, then steps back and brushes by him and out the glass doors. He lifts his eyes to the mezzanine and sees her, is alarmed. He punches the elevator button three times. By the time he gets to Monet, Clementine has slipped way, taken the side stairs and gone home. For the person he was stood close to is Anne. Clementine’s sister.

Though he called repeatedly, she never answered. When her sister arrived at odd hours and rang the bell twenty times, Clementine was driven out the back door by rage. Then finally moved far way. She knew he and Anne had to have something important, deep; they never would taken the risk and come to the museum together. Maybe they had been been planning on telling her. And it was just like her sister, taking what she believed was meant for her. And just like Clementine to let her have it.

But that was then. Clementine wiped any clinging crumbs from her lips and put the tissue in her purse.  The sculpted marble clock on the mantel indicated she had two more minutes but the private door opened. Madame Valencia wafted into the room, extended her hand, then followed her client into the office. Clementine took in the brocade love seat, the table with its flowered phone, the appointment book beside the kitschy figurine of a bride and groom, perhaps hers or her mother’s long ago. Madame Valencia settled across from her, long legs crossed at narrow ankles. She looked more like a fifties model than a so-called psychic, with grey pencil skirt and ruffled lavender cashmere sweater. Her blond waves were immovable.

“How can I be of use today?” Madame asked, voice smooth as  caramel.

“I have my doubts, really….but I know you specialize in doing readings for clients with relationship issues, right? How about past relationships?”

“Everyone has matters of the heart in mind. How long ago? Here, yes?” Madame Valencia’s eyes smiled though her mauve lips moved little.

Clementine wondered why the woman didn’t know. Wasn’t this her job or did she need clues? Maybe Madame wasn’t the real thing. Her neck tingled.

“Fifteen years, here, yes. But recently there was a divorce. Not mine. My sister’s. But I knew him first. Was with him first.”

Madam Valencia nodded.”And you would like to know if he thinks of you? Cares. Wants to find you, perhaps, to begin anew.”

“Something like that. I never married…I might still love him, but I might hate him, too. I’ve been away a long time; I had to make a whole new life.”

Clementine shrugged. “Enough that I’m sought after as an art dealer. That I’m able to do as I please.”

“And are you really doing as you please? So why Jon?”

The sound of his name, not mentioned to Madame, jarred her.”Look, he took my sister–vice versa likely. They married. I haven’t talked to her since I knew they were….since they were seen somewhere they shouldn’t have been. My mother told me they divorced last year. Now mother is ill and I’m visiting awhile. I don’t know what I want to do about Jon, if anything. Can you tell me something, if I should reach out to him?”

Madame Valencia had lowered her eyelids as though meditating. She squeezed them shut and her jaw tightened as though wincing from a sudden pain. Clementine clasped her hands together and worried the fortune teller would start spewing strange things. It suddenly felt worse than absurd to be talking to a stranger, captive in a room awash with romanticism. And there was yet another cat in the window, mocking her. Too much.

Madame opened her eyes again; they were clear blue, calm.

“Your sister, Anne, is waiting for you to call her. This has been a terrible thing for her. You can find your answers with her. But Jon is long gone.”

“Anne? I don’t care what Anne is undergoing. She stole Jon, she made the marriage whatever it was and now she is done with him. This is not of any interest to me. Anne can take care of her own business.”

“Ah, but these past years have been a chore for you, yes? They have been spare… emotionally… bereft of close friends, soured by loss of trust. You have whipped about in your private life like a kite without a direction, tethered to pain. You keep close all you lost, feed your resentment until it’s become bitter sustenance you cannot live without. You will disappear into a well of regrets if you cannot let go. And love your sister as you loved her once. With deep affection. Acceptance.”

Clementine fell back. “I paid you money and this is what I get? Jon is who I’ve needed all these years…”

“It may be Jon you both once wanted. But your sister is the one who will always be here, as you could be for her. Don’t abandon yourself over a man who came and went. Free your heart. Give it first and last to your family. It is you who has truly left. Not Anne. She waits.”

Clementine felt something rumble and turn inside. She felt the river of her life as it moved from past to present and toward the future. Had Jon divided them? And did she leave behind her sister even though she was the one who felt disposed of? What was the nature of betrayal? She was suddenly made fragile, near tears.

“Perhaps,” she whispered, “this is true. It’s time to find out.”

Madame’s eyes warmed with compassion. “Not all, but much love is renewable. Tend to it.”

On the way out Clementine picked up an ornate old mirror on a table by the restroom. She looked more weary than she’d expected. A breathing, running Siamese cat slipped behind her, tail tickling her ankle. What a remarkable and strange place. She’d keep her mad impulse a secret. Now she was going to get coffee, think it all over. Or maybe it was time to call her sister. Compare life notes. Even learn to laugh about the messes they’d made. Arm themselves with real love for whatever lay ahead. 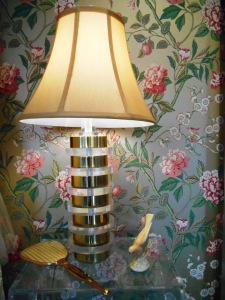 Happiness is in the quiet ordinary things - Virginia Woolf