When Elle pulled up to the restaurant she had already decided she was going to eat fast and head right back to her rented cottage. The weather was rough. Rain had pummeled her car so hard it was miraculous she could follow the white stripes on the winding road.

It slackened, turned into a metered rainfall as soon as she parked. Due to fickle coastal skies, her getaway had been shaped by many languid hours by a fire in the old brick fireplace, books and wine glass, a notebook and pen. The beach had been nearly deserted early that morning so she had walked without distraction, sifting through sea detritus the storms had left behind. It was like paradise, as always. Her thriving counseling practice had kept this beach escape too long delayed.

She gave her name to the hostess, then waited by the door with a small group of women. They circled up, intimate conversation kept low. She looked out the windowed wall below the waiting area and was lulled by the Pacific Ocean. She wondered what kind of fortune it would take to buy a beach house. Peter, her husband of sixteen years, wouldn’t even consider it; he was citified start to finish. He would rather buy a large photograph of the sea and admire the idea of being there. He enjoyed his own vacation in Seattle or Vancouver, BC twice a year. She had her coveted beach spots.

The door opened and Elle’s eye caught two wing-tipped shoes, large and scuffed. An accompanying pair were stylish flats, black patent leather with a narrow crisscross of fabric at the instep. Mr. Wing Tips strode to the desk, long black wool coat shedding raindrops. He had a hat in hand and smoothed down neat white waves. The woman beside him turned and looked into the parking lot as though longing to escape. Her iridescent teal coat warmed a complexion that reminded Elle of old ivory. The woman’s eyes, blue and slightly tilted at the outer corners, were like still pools. Her shoulders seemed weighted, as if she found being there a chore.

Mr. Wing Tips bent toward her. ‘”Is fifteen minutes a wait alright?” His voice was solicitous.

She nodded, then sat on the bench with head held up, but her arms were pulled close as if she felt crowded. The man sharpened his hat’s crease. Even sitting at ease he was self-possessed. And tall. He half-smiled down at the woman but she was looking at her shiny shoes.

Elle told herself to not pay any attention, it was rude to stare, but then admired the woman’s hair, its silvery swath picking up light that sneaked in. It was wrapped into a chignon. Not a hair had strayed. Had they been to a church function? Perhaps going to a birthday gathering later? Maybe they had visited someone in the hospital and the prognosis was poor. Elle looked away when the woman shifted and her eyes moved upwards. The hostess came back and led Elle to a table close to a perfect view of the rain-swept ocean. She ordered what she usually ate there, grilled mahi mahi and thick garlic french fires.

She thought of Peter and his concerns about her visit. It had been stormy for most of three days and nights. He’d cautioned her to not go, citing landslides, high winds and the cottage being too far, over the Coast Mountains, stated as though it was all the way to Japan. Peter worried about many things; Elle journaled about things, then forgot them. But by now he had dived into his research on Chaucer, not giving any thought to Elle and her “wilderness streak” as he insisted on calling it, every room awash in Bach concertos. If only he could appreciate what it meant to nourish one’s self with nature’s unique array of offerings. With solitude. Without garish sensory bombardment of city life. The flash and dazzle of intellectual brouhaha.

A poem that had awakened with her at dawn came from a place she had neglected a very long while. She recalled it as she sipped her water.

If by the sea winds carry love,
my arms will be translucent sails,
take my soul to the edge of the world so
we dance with anemones, sleep with stars. 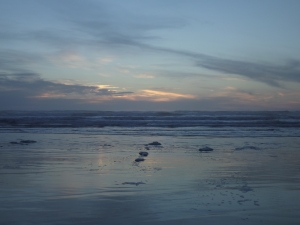 She had no idea where that came from but her next thought was: where had the romance gone? Not the brief, fun firecracker times she and Peter experienced in college and their first years together. She could manage–had done–without the surfeit of lust. And now they respected each other’s separateness, gave each other room. But what about the deeper romance that should hold them in tandem like the natural things on earth, easy but vital like flower and earth, water and river bank? She felt a lick of sorrow creep up. She backed away from it, returned to the current moment.

The man and woman from the lobby took a table across from her. The best one by the picture window above the cliff. He helped his companion take off her shimmery coat, pulled out a chair for her, then removed his elegant coat. Cashmere, Elle thought.

Renee nodded at him, then put chin in hand and stared out over the cliff to uproarious waves and wind-tailored trees. Her eyes closed, then widened, as  though to re-focus on a distant place without and without. Her profile was classic, like an older Grace Kelly’s: no feature too pronounced, symmetrical, with barely lined, silken fair skin. Her lips were perfect even while pursed.

Elle’s meal arrived. She ate slowly, enjoying surreptitious glimpses of the captivating couple. The man had returned and was gesturing out the window. He sat, then caught Renee’s fingers in his. She didn’t pull away.

“You see out there past the spit? Yes, there, perhaps a harbor seal?”

Renee considered the seascape, then extricated her fingers and tasted her salad with a shrug. He ate with relish, fettuccine noodles slipping between his lips. Renee’s brows bunched a little as she noted a slurp from him, then she looked to the sea’s sterling waves. Her expression enlivened.

“Putnam, wait, see that? You are so right about such things. Or a sea lion…? Is that possible as well?”

Elle stared at Renee, then her companion. The man’s name was unusual–she liked it, thought it might be a family name–but it was her voice that surprised with its throatiness. There was a frayed edge to the words, like that of a two pack a day smoker, and it was louder than his. Elle had expected it to be refined, sweet to match Putnam’s gentlemanly manner, his careful way of enunciating. They had seemed like minor royalty at the start.

“Sure, and those cormorants there? They’re so hearty. Adaptable in all weather, yes? As one must be to thrive here.”

“As we all must be to just live, my dear. Most certainly to live well.”

And with that Renee gave up tension, worry or sadness, whichever she had brought into the place, and she transformed, her eyes a vibrant blue, her smile dimpling soft cheeks. She barely laughed–a chirp, really–but Putnam tilted his head and winked. Then each gave full attention to their meals.

Elle tried to not stare further. She scolded herself for being so hyper-observant and letting her thoughts become meddlesome. It was a bad habit. She just loved to study people, wanted to know what made them yearn and hope and care. What motivated their effort to really live their lives. Or not. Was Putnam a retired small-town doctor who married this younger woman of good standing, both stylish and attentive, a few years after a first wife had died? Or was she someone who had long been independent and given in to his persistence only after he visited her numerous times at a classy lounge where she sang jazz standards with a sultry alto? Perhaps they had fallen on hard times lately and this good meal was a blessing.

Renee reached across the table. Touched the edge of his white shirt sleeve. Putnam raised his eyes. They said something indiscernible due to the shepherding of more diners to their corner. But Elle could see they had almost imperceptibly mended things, passed a hard turn and were moving on. Renee had given in to his warmth and consideration. Their conversations flowed to and fro and so, Elle suspected, did their silences. She wished the new diners would quiet down so she could hear the couple but knew she should stop. It was not her business, after all.

Her own dinner was finished. She signaled for coffee and a dessert menu. Why not tiramisu? She had never tasted the extravagant coffee-flavored, cheese and chocolate-filled cake. But tonight there was no Peter to caution her against sugar or calories. And no Peter to tempt.

The rain had stopped. Renee and Putnam and Elle all looked to the sea. Sunlight burnished mighty waves, sea spray like fine lace. Clouds fell apart, leaking cerulean sky though slate grey. The sunset would be noteworthy.

Elle turned her head slowly toward Renee, and the older woman looked her way. Their eyes rested on each other. Renee nodded once, perhaps to acknowledge her awareness of Elle’s scrutiny, then returned her attention to Putnam and the sea’s beguiling performance.

The next few moments were full of chocolate that lit up Elle with pleasure. She wondered if Pete would take a bite off her fork, just one, and admit its virtues. She looked at her cell phone, then dialed.

“I was thinking. Could we take a vacation together this year? By the sea part of the time, by city another part. So we can hang out, share it all. For a change.”

Pete said nothing as Bach changed to Mozart. She licked the last of the tiramisu from her fork.

“Just when are you coming back?” he asked. “I’ve missed you. Yes, we surely can find a place we both want to be. I think…but how about home for starters?”

Elle paid her bill and left without a backward glance. The wind whipped and sang out, brought scents of sea creatures and sand and gnarled trees. Tulips, brave and bold, wore rain like jewels. She did wonder what Renee and Putnam were going to do but she longed more to leave them. She needed to make her way back home and just hold Peter.