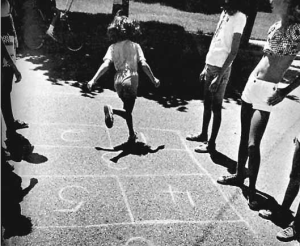 The Callahans came to Red Oak at the wrong time, Ginny thought. School wasn’t quite over. Neither was it August when most people moved to start anew. She watched from the porch swing, legs reaching out so her bare toes gently nudged the back of her younger brother’s head. He was bent over a Superman comic book. When Ginny paused to twist around and get a better look at the moving van, Brian said, “Don’t stop, it feels kinda good.” She placed her foot between his shoulder blades and pushed, but he just laughed as he flattened out. Brian was too good-natured to satisfactorily tease sometimes.

The moving van had license plates from Texas, which Ginny found intriguing. No one she knew had been there nor did they desire to. Ginny knew it was a big place with too much heat. Everyone wore cowboy boots and hats. Nothing like Michigan. They didn’t have snow or endless lakes. Or autumn color or cider mills with cinnamon cake donuts every fall.

Ginny had already decided the family of five had limited experiences and were likely boring when Evie walked down the sidewalk with a red Chinese paper parasol. It was held high to shade the palest skin Ginny had ever seen. She had white blond hair. Her eyes were hidden behind blue sunglasses. Her white shorts were very short. Ginny’s mother would say “not enough to sit on.” Her shirt was shorter yet. She was about the same age as Ginny, maybe fourteen.

It was spooky watching the girl glide up their walkway, then stop midway. She was like a ghost with weird fashion tastes.

“So,” she said, “are you somebody I should know or vice versa?”

Ginny frowned at the way her vowels bent and slurred. She could just make out the words, though, and shrugged.

Brian was watching from the wooden floor but popped up. “Yeah, or she’ll run you over with the porch swing someday.”

The girl nodded at them and floated up the steps. “Cool. I’m Evie.”

She held out a small hand. Ginny noted silver nail polish, and gingerly took it, thinking the girl too white to be out in sunlight. Maybe she was a vampire.

“What’s going on in this little burg?”

“Where are you from, anyway?” Brian scooped up his comic book and sat beside Ginny.

Evie eased onto the top step, parasol folded. “Dallas, Texas, the only city in the U. S. of A. worth noting, Mama says. But, then, she would say that, having only lived in Dallas, London, and Stockholm. Daddy could care less, as long as he has a home base.”

Evie lifted her shoulders up to her ears, took a deep breath, and released it. “Swedish. Stockholm is in Sweden, kids. I’m Swedish and Irish, oddly but happily. But enough about me. What about you two?”

“I’m Brian.” He didn’t extend his hand as he rolled up his comic book and batted a bee away. “Ginny’s one and only brother and sibling.”

He said this proudly, as though showing off vocabulary or specialness. Ginny put him in a headlock, then let him go since decent behavior was expected when meeting someone new.

“How fortunate. I have two sisters. Maybe we can come over and throw a football around with you.”

It was hard to tell what this Evie really meant. Was she laughing at them or being serious? She didn’t look like she got those blue- and-silver sandaled feet dirty much less tossed a ball of any sort.

“Our dad is a Production Manager at Thompson and Teegen Furniture Design. Our mom stays home but used to be a nurse.”

“Well, what a coincidence! Mama’s a doctor. But no job here yet.”

Brian stared at her. He hated doctors and dentists. “Doctor? For what?”

“For horses, dogs and others, of course. Humans are apparently just too ornery and irresponsible.” She made a face indicating distaste of her mama’s attitude. “Daddy is going to work for Thompson and Teegen, CFO. It’s killing mama to have to live in a northern suburb of Detroit.” She smiled wryly. “No doubt we’ll be seeing each other a lot more.”

Ginny pumped her legs. “Yeah, we already heard about your dad. So what about school? How come you’re here before summer?”

Evie lifted an eyebrow. “I meant I went to a private school. The year finished two days before we moved.”

“Oh, my, Protestants. Well, don’t mention it to Daddy or he’ll worry about the company I keep.” Her laughter was bright and tinkly. “I won’t be in Catholic school any longer. Red Oak has public schools only, which is one of the few happy things about coming here.” She fixed her clear ice blue eyes on Ginny. “I’m hoping, anyway…how do you like it?”

“Nobody gives a fig what church you go to or if you do. I don’t know if that’s what you’re hoping for or not. We’ve got a great soccer coach. And our choir is the bomb; we won regional this year. If you get good grades, you can relax.”

“And the boys? Are they worthy of our attention?”

Ginny tried not to grimace. Not the sort of neighbor, then, to play soccer with or listen to her dad’s collection of jazz records  or watch mysteries with during long winter nights. The conversation was tiring already.

“They’re boys. Some are stupid and some are pretty good to know. You’ll have to find out for yourself.”

Brian rolled his eyes. “Here we go! Time to read my comic again.”

Across the street Kenzie, Tina and the others started up a game of hopscotch. Ginny had told herself she was done with jumping rope, hopscotch and making forts but now she had an overpowering desire to join in. Instead she turned to Brian and pushed him off the swing.

“Buzz off now that you’ve met her.”

“Aww!” He threw a wad of bubble gum at her but it missed, bouncing off the porch railing and into bushes. He went inside, waving at Evie. “Later ‘gator!”

Evie fully smiled for the first time and her cheeks pinked. “Sure. We had one in Dallas, on the patio. It was a white metal slider, though. One more thing to miss. But this is good.”

They swung in silence and watched the neighborhood girls tossing a hopscotch stone, hopping and jumping. Behind Evie and Ginny, furniture was being taken off the truck and voices called commands. The Swedish woman’s accent was apparent when she shouted for them to be “very, very careful with that Tiffany lamp! My mother-in-law will faint if you so much as chip it!”

Ginny stifled the urge to turn around and get a good look. Later she would acknowledge the new adults as needed.

As if reading Ginny’s thoughts, Evie said, “Don’t look now. She isn’t at her best. Jet lag and too many drinks last night at the hotel lounge. Stress is plain unbecoming, I always say. And Daddy commanded she drink only iced tea for the rest of summer. We’ll see how that works out.” She shuddered. “He’s flying in tonight, thank goodness. So do you play with those kids or are you beyond that now? You’re at least twelve.”

“Ninth here. Or tenth; we have to meet with school people, I guess.”

“You do seem older. Anyway, I really like sports. But those are baby games. I can bike ride ten miles. And as far as school– I just want to get through middle school so I can get to high school–”

“–and then finally leave home, am I right? But biking? Too hot in Dallas. I’d sweat to death and nasty things like big spiders and fire ants to avoid. Major arteries are choked with traffic. This place seems better to navigate, so far. I hope.”

Tina waved wildly at Ginny. Ginny sat on her hands.

“It’s different. It was home.”

“Evangeline Therese Callahan, where are you?”

She turned around and sat on her knees. “Right here, Mama, introducing myself–I’ll be there soon!” She slumped in the swing. “Mama ruins many pleasant moments, often by saying my full name.”

They swung back and forth, spring heat cooling on a sudden breeze. Mud wasps hovered above them until Evie opened her parasol and shooed them off.

“My, I was hoping you’d ask, Miss Ginny,” she said, drawing out her vowels to a ridiculous degree. “Let’s show the ladies how it’s done.”

They played two hopscotch rounds, Evie doing much better than Ginny had expected and encouraging the younger ones. Tina and Kenzie took to her exotic accent and manner after the first few minutes of shock, asking too many questions. Then Evie’s mother’s high-pitched voice directed Evie to immediately help with her younger sisters. Evie picked up her red parasol and opened it, spinning the dragons and flowers around and around from her shoulder. She beckoned Ginny to come along with a rightward movement of her head, luxe hair swinging.

“We may as well get it over with. Have to keep grown-ups and siblings pacified. By the way, I love music, too. We have a grand piano that better have made it without a scratch or a sour key or I will just die of outrage! I’ll play and you can sing–maybe we’ll create a whole damn-fantastic musical and blow everybody’s minds. What are your thoughts on that?”

Ginny felt cheered by the twirling parasol and stepped into a sliver of shade. It cast a reddish glow on their tanned and ivory skin that was strange. It was an excellent color on them both.