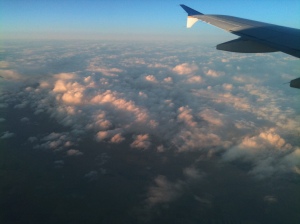 Though I have days to prepare, I’m already madly packing in my mind, selecting clothes I want, making a mental list of toiletries, determining the comparative value of protein bars (added protein) versus chocolate-covered pretzels (dopamine upsurge =crunchy happiness), and considering what books and magazines I want to lug around. The last seems like a critical decision, but that may change tomorrow. Tomorrow it might be how to find a corner for the white loafers I love but rarely wear. Or the hoodie, just in case. And I can’t forget my omega-3 fish oil pills! And mints for my purse.

I feel like I am about to embark on a journey into another world. In point of fact, I am. Not the Amazon basin (I dream of this) or County Clare in Ireland (I wish). A five hour plane trip back East for nine days. That’s it. But it’s not a very familiar world. Though I have lived in other states, my home has been in Oregon for over two decades.

My oldest daughter, Naomi, has invited me join her exodus from her old place and job at a college to a new place for another college job. Virginia to upstate New York. When she first mentioned it I counted off reasons why it was impractical–costly, lengthy, inconvenient due to family needs as well as writing projects and other weekly commitments. I couldn’t comfortably lift and carry heavy stuff in order to help her so I’d only be moral support. Oh, and her youngest sister has a wedding coming up in the fall–there is much to save for, think about and assist regarding all. And I’m not so good, anymore, at handling three different time zones, questionable food sources, not to mention foreign beds.

Naomi ignored these. “I have a mover coming, mom. You don’t have to lift anything, just be around. It’s not a whole month away. And you’ve not yet been out here for a good visit with me. Plus, this can be a little vacation. You’ll be fine. And maybe Cait can take a day and drive over.”

She was probably right on all counts. And when I mulled it over I realized I haven’t even been alone with her for more than a short day since…well, perhaps the first year and a half of her life. Her brother was born, and then a sister and then two non-biological sisters joined our blended family (one of whom is Cait). Except for the beginning of Naomi’s life, there has forever been a group involved in all activities, overflowing the rooms and filling up time. She went to college at eighteen and a couple years later I divorced and moved with two children to Oregon. She visited us on holidays, for a week or so in summer. Some of the family attended her Masters’ art exhibition at Carnegie Mellon University and visited her a couple of times in Virginia and Michigan. But she has travelled to see the family here or elsewhere once or twice a year.

Since she began college, twenty-three years have somehow passed. I was aghast that I’ve not spent an entire week alone with her since her toddlerhood. It seemed too long overdue. I talked to my spouse, who travels a great deal. He said, “Sure, I have enough mileage to send you. Done. Go and enjoy!”

In the span of twenty-four hours I had a flight booked. Then I wondered what on earth I had done. I am still wondering, though committed and engaged in preparations. My full disclosure is that I am not an experienced traveller and, thus, a bit anxious. It isn’t that I haven’t desired to visit more places, but matters of money, time and convenience can alter one’s plans.

When I was growing up, I would have said I was and would forever remain a traveller. My parents took us on trips each summer, often by car. We visited nearly every state to sightsee–for our education, my father would remind us, as well as to visit family and friends. Since we had a decent-sized family, that meant five kids (the same number I raised but with the aid of a minivan) were squashed into our sedan’s back seat, or I would sit between my parents until they couldn’t bear my wriggling or bouncing. I don’t recall feeling claustrophobic–we were crowded at home, too, and we managed. But we took turns hanging out windows until the parents scolded us. There were plenty of stops so we could run off energy or soothe tempers. And we viewed countless historical markers and places, breathtaking scenery, stopped at museums for seafaring or military events or arts and crafts. Later on, we camped in a pop-up camper.

It was the ordinary sights and sounds, the colors and textures of countryside flashing by, impromptu stops at the odd drugstore or cafe for lime Cokes and grilled cheese, the exploration of forested state parks or walks along rocky coastal beaches that I recall. I learned things, yes–everything from impressive geological formations to what farmers planted in different parts of the country to tidbits about Mark Twain or Leonard Bernstein. But it was observing people live their lives that fascinated me. I wondered over all of them, even the ones we passed in cars. Who were these unique beings? What were their hopes? Did that fussy red-headed boy like learning new things, too? Did that round-eyed, elegant young woman want to be a doctor, flight attendant or a famous singer? How was life lived behind closed doors in a neat, quiet place with the pretty town square–or in the maze-like, beautiful metropolis of Boston or San Francisco? Sharing events with others was a bonus but the images and questions were my treasures to hoard for future analysis.

I certainly dreamed of travel. I devoured every issue of National Geographic and Life with hunger. I was possessed of a spirit that craved to roam, perhaps to collect anthropological data, certainly to absorb sights and smells and feelings, meet such people whose very gaze might shake my world up. Fall in love in Italy. Write moody poems in Argentina. Create elaborate stories from the seeds of real-life stuff. Meantime, I took buses halfway across the country as a teen, hitch-hiked when it was still fairly safe, travelled by train a few places and flew enough, my only thought being how excited I was to be on the move. And I planned on exploring countries beside Canada (whose wiles I am fond of and still return to enjoy).

But now I inadequately meet my definition of a real traveller. I am often hesitant to embrace the how and where of leaving home for a far destination. Off to the Pacific Ocean is a breezy couple of hours drive. To the Atlantic way over there is a challenge.

Maybe it started way back, right before 9/11. That spring my mother–my second parent to pass–died. After attending the funeral in Michigan with family, then addressing estate business, I returned home alone. On the plane I was so weary and bereft I could not create a way to relax, be calm. Just be still and carry on. My heart raced uncontrollably. I was abandoned, lost, floating in an emotional netherworld without beginning or end. Looking out the window did nothing to improve my state. I wanted off that plane but had to endure a lengthy flight. I felt so ill that by the time I arrived home I was barely able to walk unassisted. It was grief that rendered me powerless and fearful. My heart was breaking–and that was before I had a heart attack that summer. But the flight was endured. I put the anxiety behind me, I thought.

I still visited places, saw noteworthy things and met intriguing people but I don’t kid myself about being any seasoned traveller. I have several family members (my parents were two of them once) who have been all over the world more than a few times, including Naomi. My idea of happiness is staying in a cottage at the Pacific Ocean or hiking in the mountains, driving to Seattle or ferrying to Victoria, BC. Even an impromptu day trip brings me pleasure. I am hinting to my spouse about a train trip to Vancouver, B.C. next year.

So about this trip to see Naomi. I am brimming with anticipation of all the new things I will see and do. And I am nervous, as I usually fly with others. It is the unfamiliarity of things that both thrills and somewhat intimidates me. If I step back and assess, it is much like other trips–a different way of experiencing time and place, opportunities to learn. To enjoy being renewed in spirit and mind. Riding on a plane is a means to an end. Even better this time I will share each day with my oldest daughter, finally. Revel in her creative intelligence, wry wit, industriousness and boundless good heart. We may learn more about each other and our lives than we reckoned. But this is what I know: we have little enough time to share love. I want to see her eyes shine up close. I want to hear her stories first hand. I need to laugh over stupid stuff, share spontaneity with her. Drink iced tea in the sun as we catch up on crazy and heartening family stories. So I am jumping at this chance even though I’m telling you, it is not easy for me to step onto that plane alone.

Back to packing then. I’ll take my good camera, a pen, pencil and notebook. Laptop, yes? Two novels. That new lipstick? White cropped jeans or grey crops, green or purple top? I am pretty good at organizing so it’ll all get done. I’m giving myself over to this. Going with the wind; may it whip up more adventuring. Welcoming each day with Naomi (and Cait if she can join us) as our mother-daughter journeying continues to unfold.

(NOTE: Due to being busy with travelling, no posts will likely appear next week. But one never knows.)

42 thoughts on “Becoming Bolder: Disclosures of a Somewhat Reluctant Adventurer”

The sailing adventures of Jez and Susie from the UK to the Caribbean, Pacific and beyond..

My adventures in creativity

about the craft and business of fiction

Thoughts on design and adventures in photography by Jeff Golenski—UX designer at Automattic.

What Next: Behind Roo's Ruse

Is it destiny, happenstance or stratagem?

Looking for meanings in words, images and sounds

The Art and Craft of Blogging