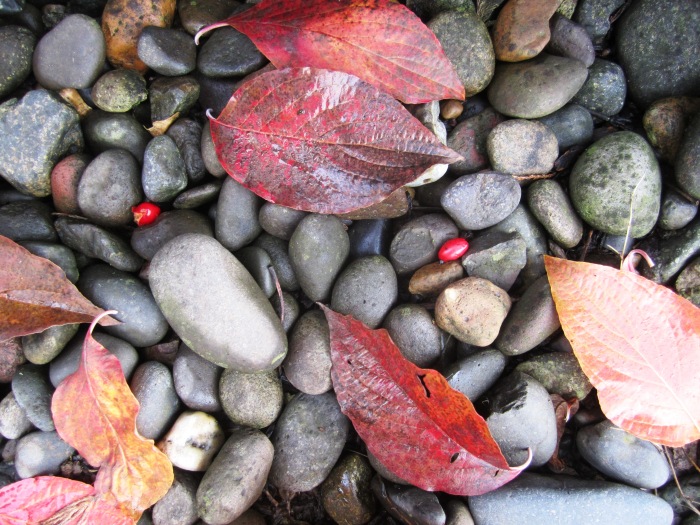 The subtly greyed and matted clouds release fat drops and with it, its brief burden. Vast tangles of plants drink up, leaves dancing. The earth is an ancient darkened sponge, its green and multicolored varietals like personal attendants caring for its wellness. I want to disturb nothing, be only welcomed. Each stone and seed and bit of dirt, every worm and insect has been waiting for another rain and I, with them.

Sunshine presses against the drear; the day won’t let it in, or only so the air is gauzy with its brief pearlescence. Distant chimes vocalize in the sodden breeze as if heralding this gathering of moisture. Fragrances are released around my feet as I pause on a woodland pathway. My chest opens to inhale the primeval perfume of Noble firs. The damp expands in my lungs, courses to my face and fills my eyes with tears that detour to lodge in my throat. The rain covers me lightly and I am released into its favor.

I cannot walk far. The hard boot on my foot protects a broken toe and hinders exploration, but I persist. September’s argent air is transformed by an alchemy of ribbon of golden light; witnesses include myself and birds making note. Their voices are ebullient, soon half-tamed by more seepage from the sky. My hood goes up and I plod on.

The sturdiness of the day is apparent. I see it in the faces of those who pass with eager dogs in hand, children chortling as they play “catch and be caught” with a parent. But for me an almost tender solitude awakens inside the ashen quiet. It pulls me further into the woods as if we, too, play some devious game, pursued and pursuant. The air is a soft jostle on my skin. Trees whisper incantations only they can interpret though I listen deeply. I want to see what they see from their green glistening crowns but cannot scurry there.

Once, as a child, I did. Not here but elsewhere. Desire for another place and time folds me into a thousand paper cranes. What wish can be granted? Nostalgia makes me pull my jacket closer as rain seeks skin. But wishes are not real and my prayers are for something else. For stamina. For the gratitude and care that will keep it afloat. At this thought, my sister’s face somehow finds me, the one who passed in spring. My eyes close. Is this solitude made of a sheaf of tenderness, of grief, or foolish yearning? How alone we are, yes, unto loneliness when we do not suspect it.

A phantom–not my sister, no; something never bodied yet recognizable–is shadowing me. It wraps itself around my shoulders like a comfortable but holey shawl, one that’s woven with losses and longings. More, a spectral thing that has no voice but those found inside dreaming and imagining, no words but those uttered without sound. It’s name is melancholy.

It is an old companion. It will not desert me even now when nearer the denouement of my adventures rather than beginnings. There may be reasons why it comes upon me in this rain-blessed wood or any other moment but they matter less and less. A knowledge of sadness arrives with us as we exit the refuge of our mothers. Humans are made to manage its shifting weight alongside lightness of elation. It’s counterbalance, acceptance. At times I hold this sadness close like a lost thing, its vulnerable ache a plea not refusable.

I am seized by a restless longing and the desire to weep. I cannot run with foot impaired and so I wait.

The power of the trees, bold and tall amid the drenching rain, is the power of time, of being tested and found mighty, so now remaining. They incorporate a mystery we cannot know enough with mind but with our blood, in the dormant spheres of soul. In the gleaming, darkening wood there is this reminder: at the heart of sorrow is a beauty; in the center of beauty is infinite renewal.

I breathe in the piney air, let my being rest.

Melancholia is a remembering and a forgetting. It lets me see backwards to all the times I knew what love was, and all the times I did not. It takes me to innocence and slow shredding of it. It hears the keening of the world and gathers in my small voice. But it urges me to believe in something finer than all that has been misplaced or traded or lost. For my heart to be offered to the world as if it was indestructible.

The touch of all this is enough to hurl me right back to God. I ask how does one person make a difference but the woods are silent and watchful of my species. Kind, yes, the grand old firs, but unwilling to tell me more than what they already have. It must be enough. And I, as well, within this lonliness. And so I leave.

Melancholia plunges me into deeper waters of place and people, of body and soul. And so the rain today has carried me along. I have learned that to surge against its movement will result in a price I do not want to pay. I heed this and give in. It is one more feeling only, another bit of evidence that reveals that I am alive upon this earth.

At home again, I am listening to Howard Hanson’s Symphony No. 2, Op. 30, “Romantic”. It takes me to that part of life where music has ever spoken to me with vivid promises. Where sweetness evolves from sour, good blooms from maligned or discarded seed.

As a teen during too brief a season in my life–those ectstatic youthful times–the one in which I was making music daily, I found treasures that stay with me. Though impetuous I was kept moving forward with ongoing lessons in self-discipline, gaining strength for the years to come. I thrived on nourishment of my innermost being and could not imagine otherwise.

I recall one summer, perhaps age fourteen. I would stand apart from other arts campers, shoulders back, spine so straight then (that age giving me a glimpse of sensual perfection) as forest breath mingled with mine. I surveyed the wide indigo lake nestled between black-green northern pines and knew it was going to be alright, all of it, Hurts and yearnings. Tenuous hope and intense, mind-boggling wonder. Knew that there would never be any other choice but to give way to a passionate devotion to life, come what may. I felt it as God’s presence, mysterious and potent. There was a true point of balance within reach if I released my fears. In reality it became so, later. But a tinge of sadness–that what we adore can be taken from us and this includes everything– remained like a secret, buried deep, indelible as the color of my eyes.

I am writing in the midst of a softer, quieter September afternoon, as if the rainfall has removed brittleness from the last vestiges of summer. As if the land is made fecund with different bounties. Wet winds have ceased to sweep across the city while throngs of clouds float by, their vaporous innards aglimmer with autumn light. There is a richness stirring within me. I stay very still.

5 thoughts on “This Rain of Solitude”