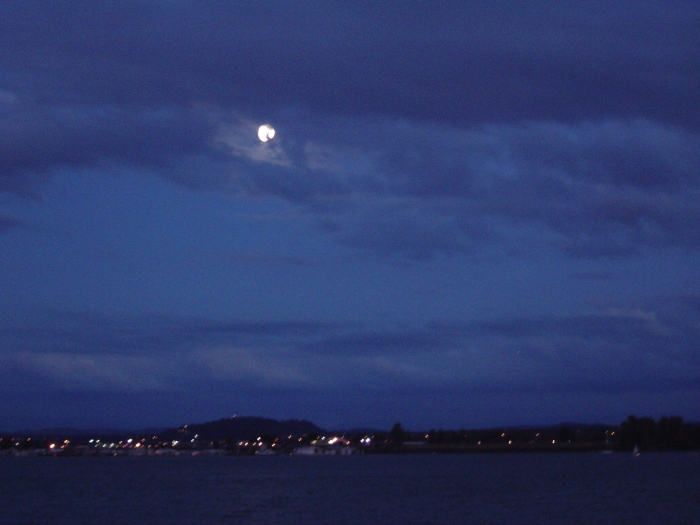 It was that hulking bridge, the one I had crossed over innumerable times, one more major structure that arced from east to west, from my side of the land mass to the other where the city center is at work long hours, beckons and dazzles, then makes night turn over and into itself like a magic jacket that’s never worn out. It must sometime lay itself down to rest, surely. But there are many people who do not, at least not for long. Or they may. Forever.

That particular December night it was sometime in very early morning and though city lights glowed here and there, it must been more darkness than light, the sky hiding its mysteries. The bridge must have felt more real than all else for a few moments. Rain abundant and chilled, starry maps obscured, the inky depths of the behemoth river a bitter cold yet a living thing and moving fast.

No one else was there–or near enough to notice. Just one man.

On the way home from work I got the call from my sister. I knew it had at last happened after many failed tries. I sobbed in the traffic and hit the steering wheel. There was nothing left between me– all of us–and the slash of truth.

He was here. Then gone.

It took me a year to even dare cross that bridge again. I was forbidden by fear and pain. And when I finally did, I screamed. I was in the car with two grown daughters in the back seat and as we crossed over my scream spiraled up, out, away. Screamed and drove too fast, yelling I’m sorry I’m sorry! I’m so sorry but I can feel him jumping!

I did not drive over it again for another year. I still do not if there is another way. I know I will always see that sign, the one that boldly, often too late lists an emergency number for suicidal persons who have scaled that highest of our many city bridges.

I’ve never written of it for the same reason I screamed: no words can define that kind of wretched void. But it has been ten years since my nephew committed suicide and now I can say it, how his leaving yet draws sorrow to my chest, mind, spirit.

His mental illness was not something most wanted to think of often if we were honest. It was difficult to witness. The depression was dragged about like it was another despised and invisible body, and sporadic bursts of mania obscured his thinking, hounded his rest. It was breathtakingly hard; we, too, hurt–for him, for our family. There were good times when we felt relief and cheered him on. The bad ones came more often; I didn’t know what to say except I was his aunt and there for him. He’d had therapy for a couple of decades. There were many hospital stays; medications tried, tossed and revisited. He sought relief, a modicum of more normal life while on a merry-go-round of places, people, addictions, jobs.

Those of us who could shared our homes with him for periods of time. I picked him up from the psychiatric ward after he had attempted suicide again. He stayed in an extra room in the house for awhile. I was determined to get him to as many twelve step meetings as I could; he wanted to stay sober and clean again. He was safer with my sobriety as a guard against temptations. But it was a partial help at best. By then I was a counselor but felt my help small. I just cared; encouraged and aided him in practical ways. We talked. I listened, gave him food, drove him places, acknowledged his struggles. Then he got his own place again, then found a new love, was feeling much better.

There were many times he felt better. But not well enough for long enough.

He loved music of many sorts and hung out with his father, admired his being a jazz musician. His graceful, strong mother was his bulwark. He was a natural athlete like other family members, a daredevil since childhood. Movies were fascinating to him; he had an avid interest in classics, independent film and new offerings. His conversations revealed a probing intelligence that could be hidden beneath the facade of watchful onlooker. Pensive but changed with a generous smile, showing us more to offer.

I knew him only a few years, really, as he grew up far from cities I lived for decades with  husband and children. When I moved to the Northwest, he was often not present at family gatherings or only for a brief stopover. When he was more hopeful if never optimistic, and the lashings of anxiety subsided enough that he gleaned bits of peace and joy–then he met us face-to-face. The exchanges were easier, with laughter an infusion of life-giving energy. For him, for us. It was understood challenges persisted and when it was roughest, he kept to himself. We were updated by his parents and sister but the truth is, his life was deeply lived and fought for, rescued and shaped primarily beyond my own tentative grasp. Beyond all our reaching, perhaps.

But I did know him a little, I mean that I got to share ranging conversations, walk a ways with him, sit with him at AA meetings and hang out at relatives’ with him, share a meal and a smoke. I have recurring memories of the two of us standing in yards, on sidewalks or porches, smoking and talking, silence measuring our speech. This may seem minor. It is not. It was much of our time together. But mostly I had him only those last 13 years. We hugged each other close many times in that span. And I felt his suffering as it tattooed a deep calligraphy on his being, was hoisted onto his shoulders, cupped in his capable hands like a torn creature mended then torn once more and rendered into what only what he knew.

It was so little time to love a nephew, a whole person made of cares, of passionate insights and talents, nightmares waking to stony bleakness. Of rich vision and stymied efforts.

And then he stepped into the air, breaking night into falling shards, vanishing into the cold and so much farther yet.

It stops my breath to write this even now. I grieve his going, still. There is no blaming or rage to this. No more even smallest of self-recriminations. He left because it was what he finally could do. I understand nothing more.

Today is the date. I thought it was two days ago but as I wrote I  re-checked the calendar and no, it’s been ten years ago now. Tears haunt me. We do not know what we know until thrust into confoundment such as this and then know less. But it transforms those remaining behind, strikes us dumb. Takes remnants of pain and that becomes a whispering thing that speaks all the more.

Reid, you do yet move me. I feel your spirit this quiet night. My brother’s eyes are reflective of yours and his music echoes both living and dying; your sister’s and your mother’s hearts carry your being like a pulsing jewel. I burn three candles for you in the gentle warmth of my home. My nephew, they glow long and well for you. 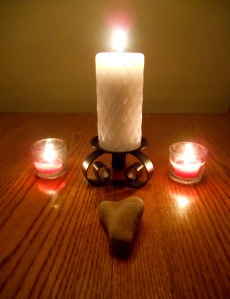 People die of suicide more than we can believe. It may be that for some the holidays play a part, or maybe not. Life is breakable, it can be terrifying and it is not for us to fully know what anyone’s path will bring, even our own. So I am asking of you as you go your own way: step into the power of your empathy. When you see someone distraught and fearful, floundering alone, when you hear their cries and feel the leaden weight of their despair, find mercy; be kind. Hold out a hand in some way, even knowing it may not be quite enough. For one moment, it might. We owe this much to other humans; we owe it to ourselves.

5 thoughts on “Breaking the Night”