I was moving at a spritely pace through my neighborhood, damp air heated up by sudden sunlight. I took off my gloves and stuck them into a side pocket as I talked with my older sister on my cell. As I wound through the neighborhood, my eyes feasted on purple, white and golden crocus; rosy daphne flowerets; stray daffodils and vivid green sprouts pushing up through sodden grass. Ah, good cheer abounded. Dear A. sounded robust, present. Peace came over me. She’s been coping with cumulative effects of multiple concussions over the past year (major car accidents). She’s the only sister I have left–just hearing her lively voice is a welcome event.  She rang off as I sped up.

Strong, energetic: I felt much better than yesterday after a phone call from my mother-in-law stirred up worry. It had led to unsettling contemplation of aging, finances, various persons’ uncertain futures and finally the unstable world. Later,  simple sandwich was eaten in the to the fanfare of a televised singing contest. My spouse has been travelling again so there was no one with whom to share criticism or delight. Frankly, it was a relief to get to bed, a fine mystery novel in hand, knowing I could start anew the next day. I was determined it would be a better one.

When I awakened, I felt more optimistic again. I carried out my usual habit of praying and meditating on what was good and meaningful and how I could improve my day and anyone else’s. Next came the daily power walk. Sunshine slid through the slate grey density of clouds, no deluges yet. It’s now March, the calendar states. I should be able to leave my velvety lined gloves home, but I’ve still had to carry them everywhere. I have a condition, Raynaud’s, that causes my hands to become and remain painfully cold when exposed to  temperatures under 55 degrees; I keep them covered half the year. But today I decided to take a chance, allow them bright sunlight’s rare, warm touch.

I went farther than usual–legs, heart, mind were inspired by a lovely day. There were hilly areas to tackle, beautiful architecture to admire. My camera got busy. I was thirsty and found a peppermint in the pocket where my gloves were stuffed. Heart rate higher but steady, breathing easy, legs powering as if they could carry on forever. I ran across another busy street.

And then the sun retreated once more. I reached into the pocket for my gloves. And pulled out only one. I had not stuffed them in deep enough, nor zipped the handy zipper. I went back to the corner where I had crossed–it had to have fallen out there.  But it was not to be seen. I jogged across and started to retrace my steps. I scoured every sidewalk, peered into bushes, at the bottom of fences and between mossy rocks, in driveways; street gutters, by recycling containers, on steps. Since I walk fast, that glove could have ended up surprising places. I was sure I would find it.

The same thing had happened on another walk in 2014, at which time I also wrote a post. ( https://talesforlife.wordpress.com/2014/01/10/case-of-the-velvety-glove/)  I am a decent finder of misplaced items. A distinctive glove, very soft black and silver with a paisley pattern, should not be tough to see. Of course it would pop up again. It had to; it is the only pair of decent gloves I have.

I had been walking nearly an hour, was more thirsty and now hungry. Though energy wasn’t depleted, frustration began to simmer. Where was it hiding? I was halfway through the return walk with eyes scanning every which way, circling back to peruse a missed shadowy spot. And then I stopped. Why was this becoming hard?

It occurred to me I was talking to my sister until that point. I experience a strange semi-blindness about surroundings while on a phone, sometimes even while talking with someone right beside me when I walk or drive…I might even miss a turn (though not truly critical information, fortunately). I figured that was the culprit: not consciously noting every detail along the way when talking, as usually when walking I pay close attention, camera readied. Thus, I couldn’t safely pull to the fore every street and turn I’d made… Was it this corner that turned onto 26th? Was it perhaps 27th, farther down? Or was I on the other side of the street? My usually good visual memory now gave me a hazy picture at best. Other strollers and joggers passed by. I must have looked half-mad as I pivoted then tuned again; paused, then started in another direction. I even retraced those steps as I was sure it was one street, then more certain of another. I tried to note anything I took a snapshot of but crocuses appear quite similar to one another, muddied grass with mossy rocks much like other spots. I studied houses and gardens which I know like my own hand after twenty-plus years living here. And yet I could not say for certain, after a point, of anything. And no glove was anywhere.

I was fighting to believe I would yet discover it, waiting for me along the way. The next few blocks I felt privately embarrassed by all that time (I was out an hour and a half, nearly two by then) and sweaty efforts. My shirt clung to me from fifty degrees temp and relentless walking. And all for the mate of a pair of gloves that cost twenty-five dollars. But I have had them for three and a half years. And I really like them; they work perfectly well. I slowed, took a deep breath, shook out hunched shoulders.

Why was it so important I find something of such ordinary, ever minor, value? Well, they’re my favorite gloves, of course. But it is also how I came to get them.

One autumn week-end in 2013, Marc and I went to Cannon Beach, a favorite beach town. He had been working way too hard, travelling a great deal. We found ourselves on edge, restless for different reasons. How profoundly we needed a getaway. So we were full of anticipation: our special spot, right by the grandeur and music of our gorgeous Pacific Ocean. We looked forward to a beach fire or two; meandering strolls and explorations; seashell, stone and agate hunting. Sleeping in and eating out. But I had somehow forgotten my gloves and the weather could be very tricky.

The first store I came to offered an array of unusually soft gloves that were lined with excellent insulation. I liked them at first glance. They seemed too fancy for random outdoor purposes but Marc insisted I chose a pair. I studied an array of patterns, fingered the velvet texture. When I chose the black and silver paisley design, I felt oddly happy. My hands were warm again, protected by gloves that were an unusual choice for my practical bent. Marc said they were perfect for me. Off we went to the beach. Our week-end was as good as we had hoped.

So perhaps that’s the real story. Why I feel I need that small soft glove. Yes, it’s for warm hands. But he has been working so hard again. Even after a year when his full steam ahead career–and our ordinary days and nights–was interrupted twice by a life-threatening health matter. A reverberating shock for us. It has been addressed but there he goes onto one more plane, gone to put out another “business fire”, to fix what others need done to keep things going. Sometimes he expects to come home, then at the last minute he cannot. At this point–forty plus years in his field–it begins to erode that life-encompassing oomph. He, in truth, has a passion for what he does. Yet the grind, that adrenalin-increasing pressure is intense.

I am used to this after all these years. I go on as usual while I also keep waiting. Waiting to simply catch up, hang out. Waiting to make family plans. Waiting to get something done that I cannot complete alone. Waiting to address long-term vital matters. I make most decisions without him as things need to get done. I am good at operating on my own. I have many interests and enjoy solitude more often than not. I don’t often feel truly lonely with friends and family around. This is the reality we have lived and will until he stops working…some day, I think!

And yet. Sometimes it can be the smallest things that exert the most power. That bring us to the truth of the matter. That glove. I think of it out there on the sidewalk or street getting walked on, run over, wet and dirty. It bothers me. It may even seem nutty or sentimental, but I want it back. And I also want to return to Cannon Beach–or Yachats, Manzanita or Oceanside. Where we will take in salt-tinged, cleansing breaths; talk at our leisure or not at all; make a fire of driftwood as the sun goes down. Read poetry and whatever else to one another. Hold hands as we walk at an easy pace, syncing our strides. Share found treasures at the edge of rippling sand. Hear the ocean telling us to step outside of time, feel the power, hear the music of other realms. Hike deep into forests that cling to coastal mountains and know the trees have been here so long they have seen it all, uphold so much more than we can see. I am immersed in a unity of elements, am right here within it, and am happy. As is Marc.

It is the small things that can have surprising effect, sometimes a remarkable impact. They can make a difference in quality of health, the experience of a day, a peaceable home life. In creative work, a career trajectory, and in a relationship.

I do miss his company. Also my lovely, warm, so velvety glove. I am likely to go out tomorrow and have another look around. It could turn up, why not? But if the search is futile, I’ll return to the little shop and look for a new pair–alas, not the same I am certain– to protect my hands. Then we will take to the beach, absorb renewal as the tides rise and fall within the mesmerizing sea.

Please enjoy a few pictures of the 2013 trip. It is a great place in every season but the mountainous roads we need to traverse can be treacherous in winter. 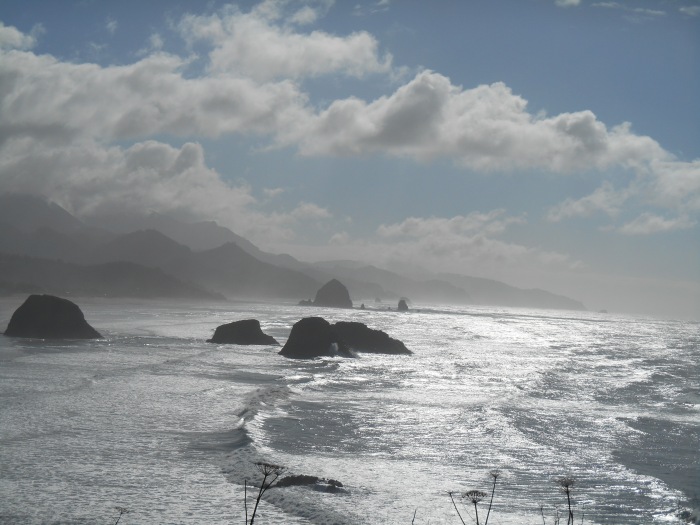 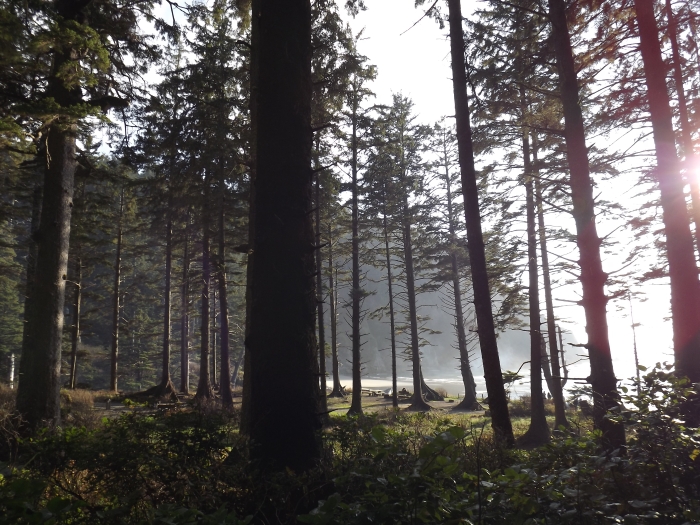 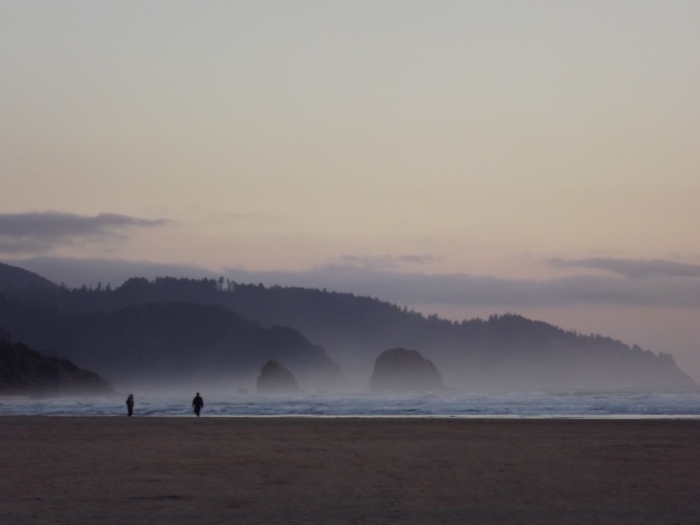 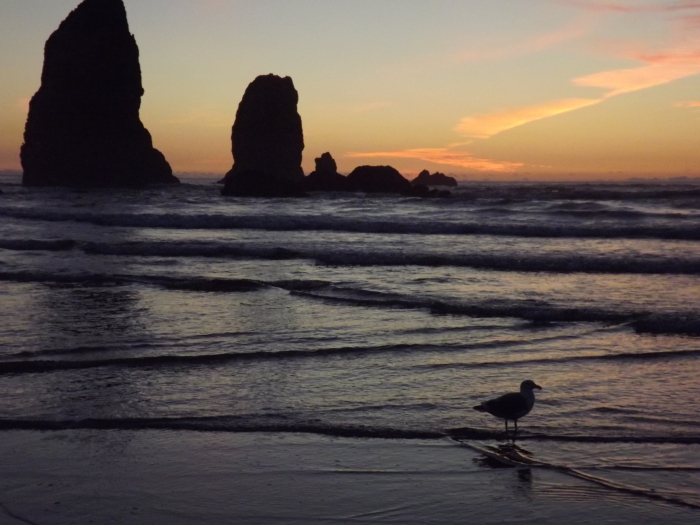 16 thoughts on “The Magnitude of Small Things”