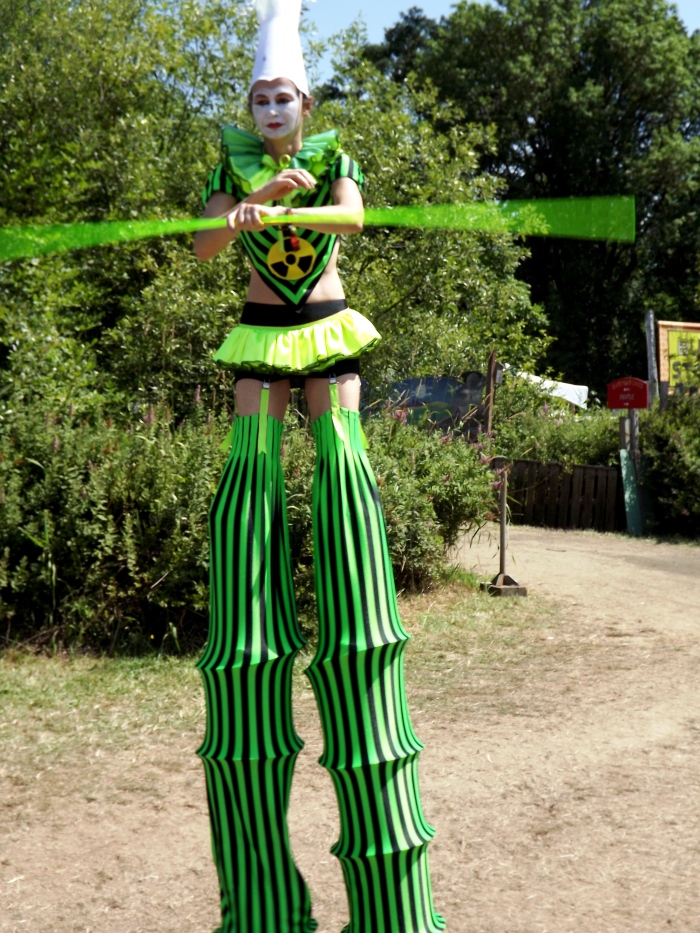 Enter at your own risk: you’ve made your way to the Oregon Country Fair!

I let my daughter and her fiance lead the way in 2012 when they finally convinced my husband and me to attend for one day. Immediately it felt as if I was stepping back into those hippie days when I attended open air music and other arts festivals with like-minded friends. I prepared for the inevitable scent of marijuana on the breeze, outrageous costumery and random hi-jinks. I was not much off the mark. Come along with the four of us to get a taste of a slightly mad, creative and fun event. Showtime! 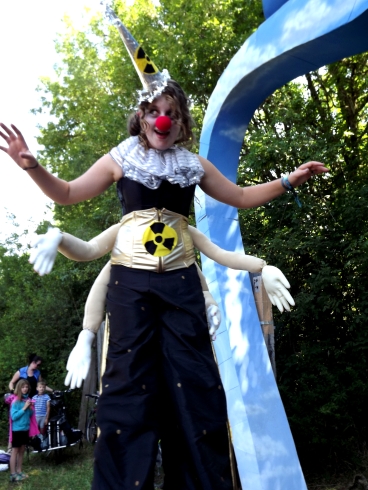 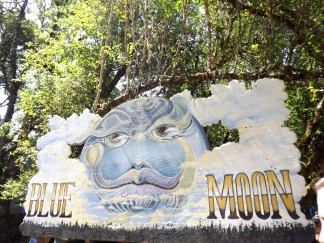 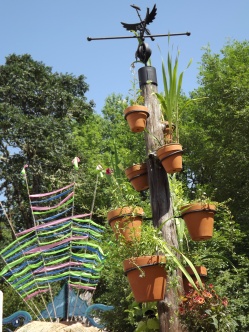 According to Wikipedia and website info, the Oregon Country Fair was conceived and first unrolled in 1969 as a benefit for an alternative school. Over the decades this fair has grown into a colossal event with at least 45,00 visitors over a three day period. Set within wooded acreage owned by OCF outside of Veneta, Oregon, it’s billed as a non-profit educational organization. They still donate funds to their chosen recipients. It has a half dozen permanent staff but thousands of volunteers, performers and artisans contribute to its ongoing annual event and they clearly provide its longevity.  But most likely go because it remains an outpost of hippiedom with its expressive arts, a broad array of seldom seen or heard fantastical fare. Plus, you can wear beautiful wings or whatever desired (it may at times be a bit risque, allowed within limits). Even if you are a 60+ years person one is encouraged to doff enchanted fairy or steampunk or what-have-you accouterments. It’s the fair’s intention that we become a part of the performance, the zany milieu.

I confess to having appeared rather an ordinary woman and did not sport iridescent wings… somewhat to my regret as I do have the capacity in me. But I did appreciate my daughter’s red dress and fancy touches of gold. And nabbed this picture of her multiple smiling faces! Others were casually attired while some were eye-popping. 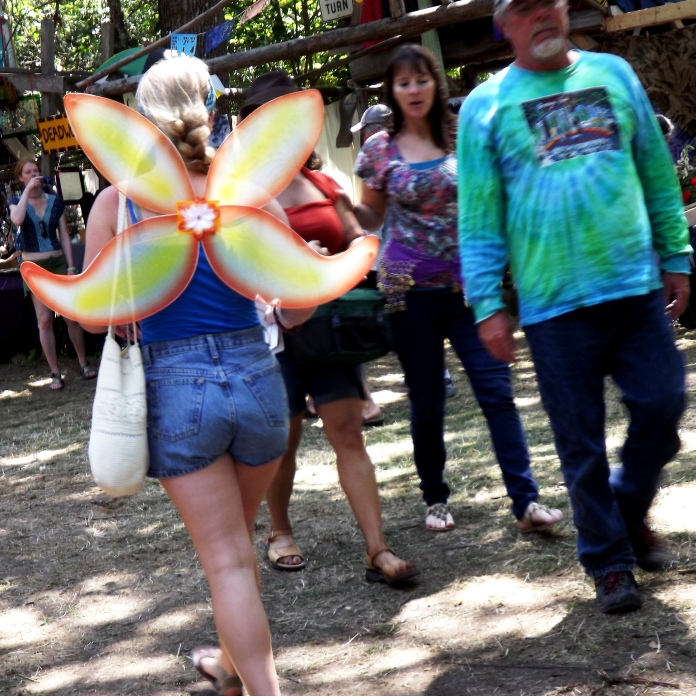 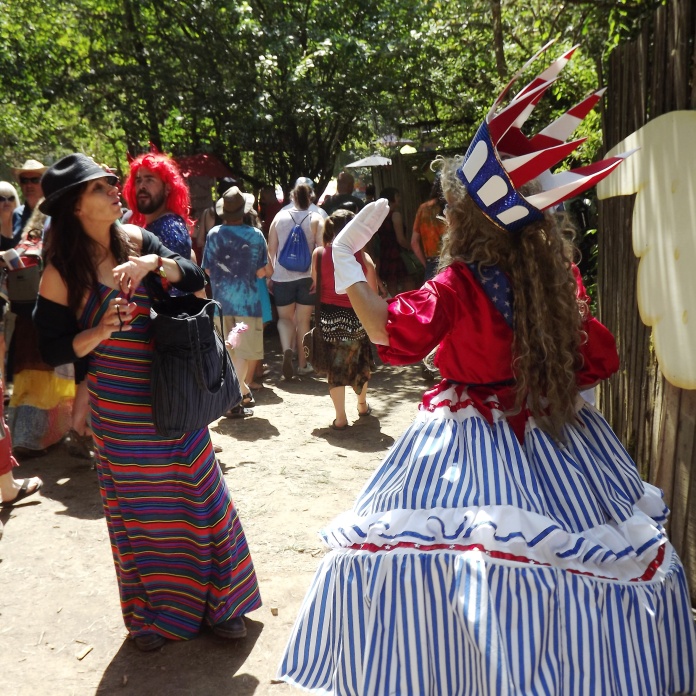 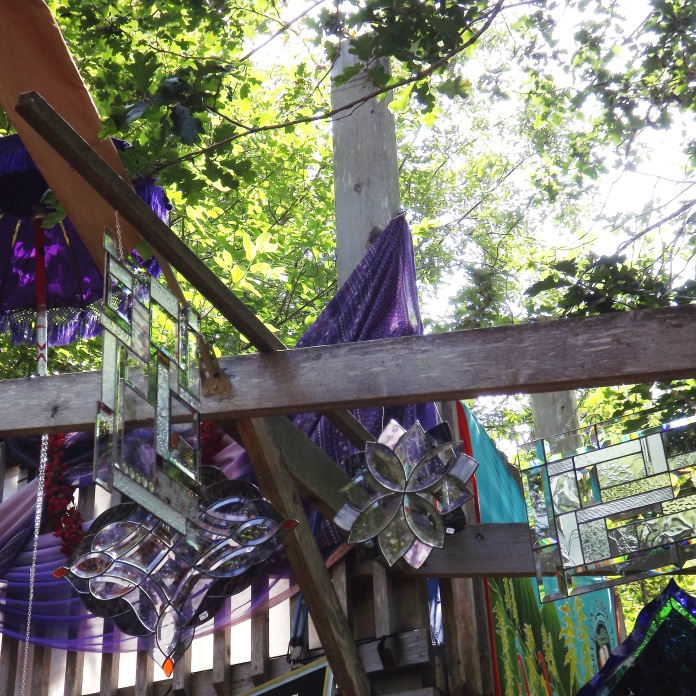 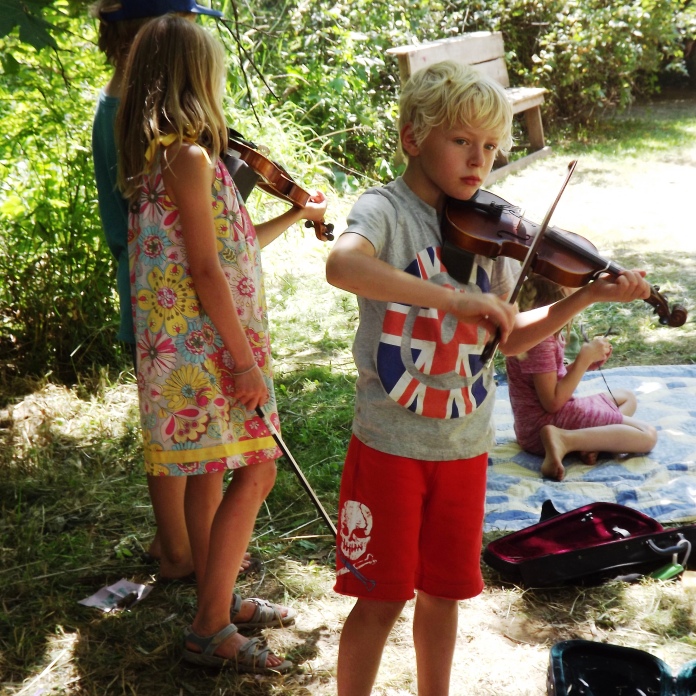 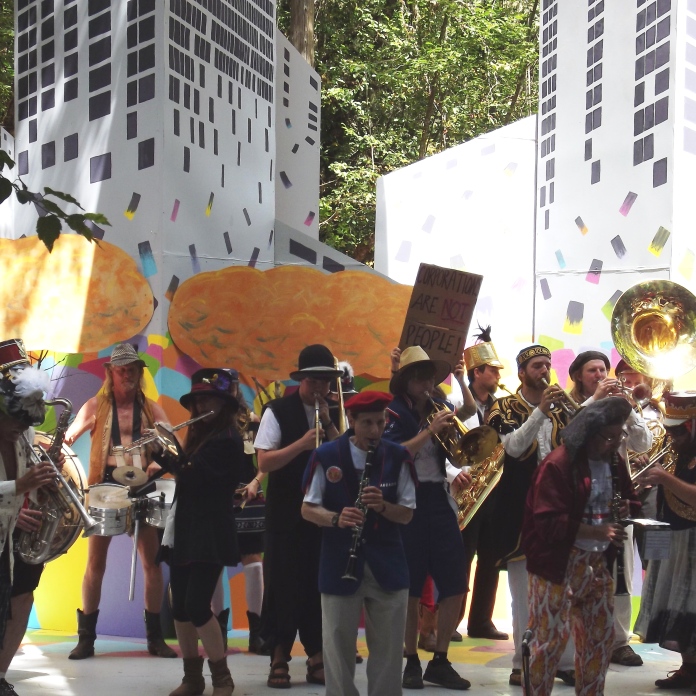 On offer were food and drink, entertainment galore, arts and crafts, music and dance; vaudeville, circus acts, marching bands plus solo musicians of all types and even spoken word. There are 960 booths at which to gawk and spend money. Workshops abound regarding all types of physical and spiritual well being plus arts and crafts. Concerts can be heard coming around each new scene, and many buskers enthusiastically perform along winding, green paths. Even a few talented children got in the act. 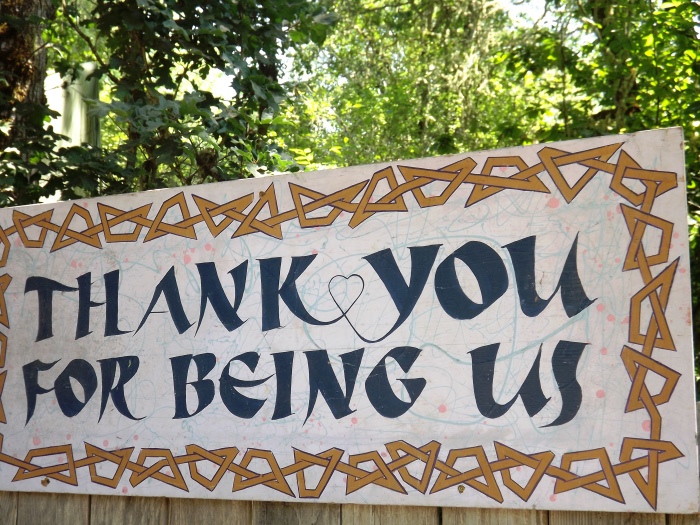 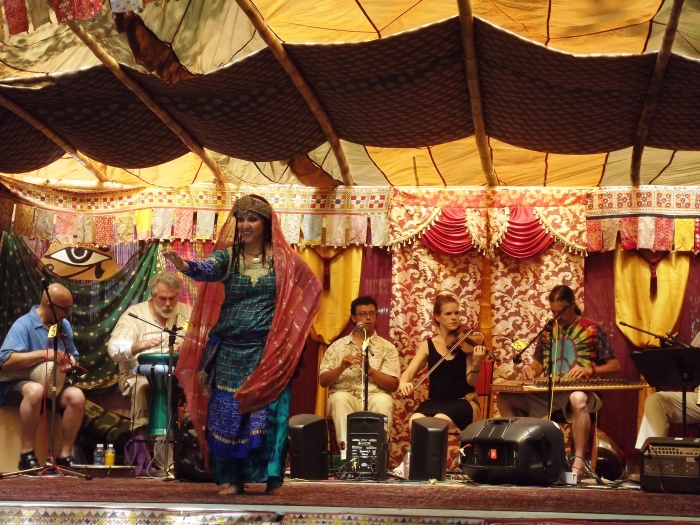 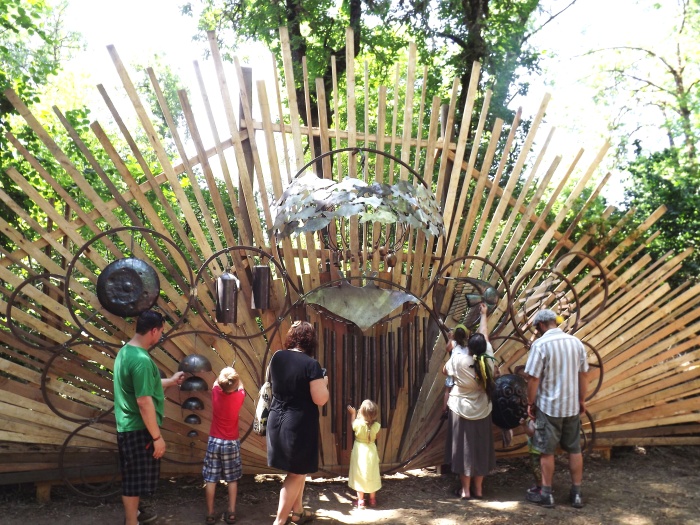 The above picture shows a musical sculpture. It was mesmerizing to coax resonant notes and unusual sounds by striking or pounding on varying parts of the metal design. I do not recall who built it.

Moving along through the treed acreage was like being sheltered by a dome of green light. We walked amid mobile fantasy that unfolded one act after another while walking through a cheerful crowd. Even stone cold sober one begins to feel one’s consciousness altered due to a myriad of changing, vibrant sights, scents, tastes and sounds. If stimulation and surprise are not something you seek this is not the place to be; one may as well surrender or go home. 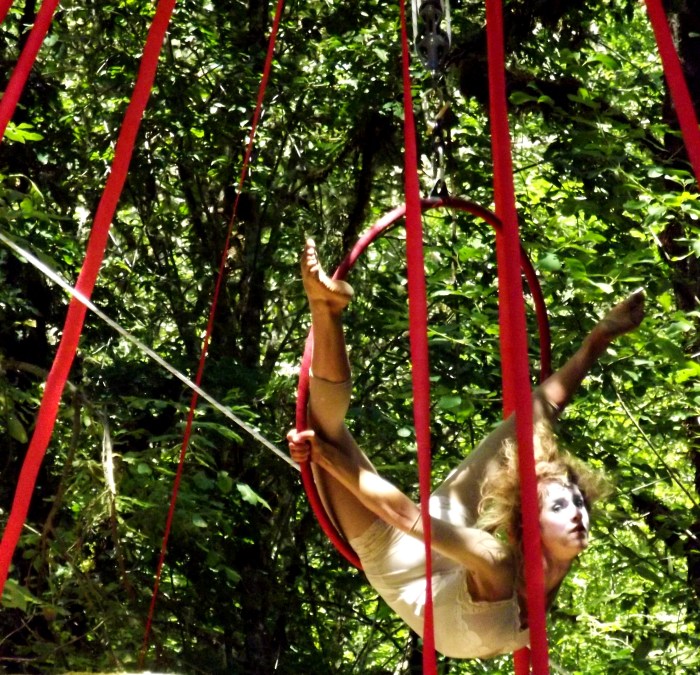 I felt I needed to attend the OCF at least once, as it is a Pacific Northwest experience, creative connection between people who might not intersect otherwise. One enters into experience as spectators during performances but then again by interacting with a kaleidoscopic moments, an abundance of milling, motley characters. The crowd was dense and sights numerous, yet there was a pervasive sense of surprise, wonderment. Peaceable pleasure.

Though I was tired out at end of a long day, ready to lounge in air conditioning with a tall iced tea, I’m glad we attended with our youngest daughter and her partner. Once was satisfying– an infusion of unique possibilities acted out in the open air– and perhaps enough for me as I embraced my own real hippie scenarios long ago. My husband found it a bit much but remained a good sport. It is one kind of Oregon summer tradition and thousands love to come year after year.

I hope you have enjoyed the abbreviated but decent sampling of an Oregon Country Fair experience as I saw it in 2012. Need a recharge? Want to push some boundaries but harmlessly? Looking for poetic inspiration? Everyone needs small breaks from a more mundane reality. May you embrace your own weird, lively, magical outing this summer!