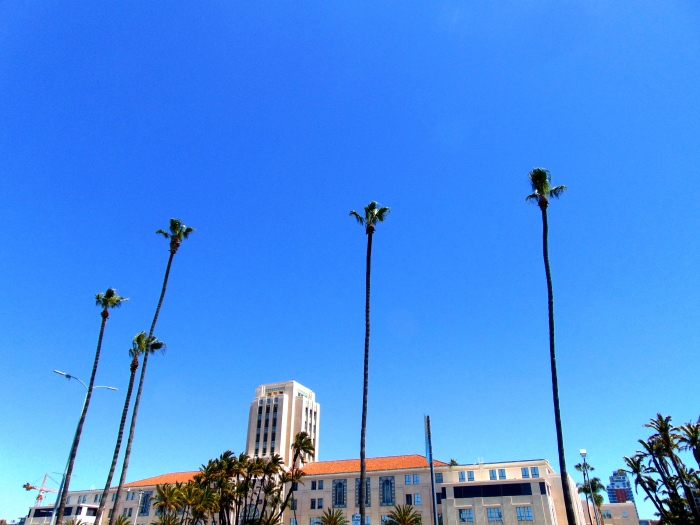 I am a contented domestic traveler (barring trips to nearby Canada), so I can’t claim chalking up one more exotic locale or vast varieties of experiences in that sense. But I can say my trip to San Diego presented unexpected moments both disconcerting and gratifying. A trio of events plus captivating places and days with Marc have set my mind to pondering  since the  return home.

As we arrived at the Courtyard by Marriott San Diego Downtown mid-afternoon, I admired its substantial facade. Yet I felt puzzled as a valet got the luggage. Where were the swaying palms, glittering oceanfront, jazzy street bustle? We were smack dab in downtown, merely six blocks from the waterfront. Though a very large city, there was hardly any traffic for a Saturday afternoon–unlike Portland’s city center, a beehive day and night. There were virtually no trees, and if I stepped into the street I barely made out a brief flash of water blueness. Construction was occurring in a couple of places. I wondered then about our “room with view.” Breezy balminess was soft on my skin and I was relieved to be there if a bit fretful for some irrational reason. I yet hoped for the best–a saying that would evoke more meaning later. I had no clue that I would go from 50 to near-zero to 100 very fast. 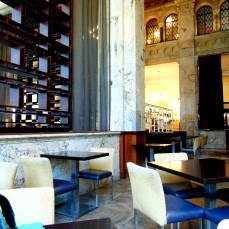 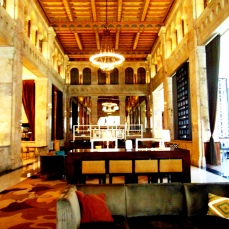 We entered the airy lobby of what was once the San Diego Trust and Savings Bank from 1927-1994. It still retains a bank’s milieu with original design features though modernized in style aspects. Designed by William Templeton Johnson, it is Italian Romanesque Revival style, a restrained extravagance. The main hall/lobby has 32 foot high vaulted ceilings. It feels medieval and substantial, elegant with marble, bronze, granite, wrought iron and large mirrors.

Up we went to the tenth floor. As we entered a nicely appointed, smallish room, I could see….grey tall buildings and a glaring pit of sandy earth where building was only temporarily halted. No water scene. No colorful streets. The room was dark,  a tad worn here and there. I was disappointed–then snared by a cresting wave of sadness. It didn’t match what I’d imagined, okay–but why on earth plummet like this? Marc was displeased but lacking distress. He is a decades-long business traveler; a perk is the rapidly accumulating of various reward points. Vacations are usually very affordable due to his hard work with such travel. He is usually blase about irritating situations; a hotel room was just a hotel room, a necessary convenience or airport glitches, the expectation. I’m clearly more the neophyte.

I should be feeling happy, I mused. I stared into the rich blue sky above skyscrapers as tears spilled onto my cheeks. Sat on a chair, arms about myself. Oh, right, there it was: that inconvenient, oft-burrowed thing, a specter called grief.

“Today is the day my sister died three years ago, then she was interred on my birthday and this week I’ll be 68…and then Mom died on Mother’s Day…it’s not news that I do not much enjoy the month of memories. I just don’t want to stay here. I’m tired out. We both need a pretty view, a good room–don’t we? Or am I being ridiculous? I’m sorry, Marc, I’m way too upset by this.”

He tried to call the front desk but the phone wasn’t working. He called from another phone which was usable. Someone came up to fix the unfixable phone. Marc was annoyed but I felt foolish, embarrassed by such emotion over a hotel room as Marc started to look for other possibilities online. Except it was not just that–it was the deeper need of a sweetening, healing time away from his intense work and our daily stressors. Things going right and well. The past months had felt like a long breath being held as I waited to see if family would manage okay. I had also recently recovered from major bruised ribs after a slip on the floor when jumping off a counter. I’d anticipated fun walks, even a hike or two.

Marc talked to someone but was told they were at near full capacity, they were so sorry. He started to look online for another hotel in the area and when another staff person appeared at the door he told him we were likely checking out. I fought back more tears and slinked off to the bathroom.

The next events blurred. I worked to get myself together in the bathroom. There was the sound of a growing cast of employees at our door. I dabbed my eyes, blew my nose and told myself severely get a grip when I caught something about moving to another spot and all being taken care of by the customer service supervisor. I blindly followed with a bit of hope quelling the distress; maybe the phones worked well and there would be a pleasanter space, even view. I was morphing back into a composed adult by the time we arrived.

We were led to an elevator, then another and crossed the hall to a second one that required a special key card to take the last elevator to the second of two floor #14s. Through a door in a small hallway and then into a spacious, sunlit array of rooms. Like an apartment. The Presidential Suite. No extra costs. For the next five days we’d stay there; the last two we’d be in a well-appointed room on the top floor. It made no sense at first glance. We wandered about, wondering why we’d been recipients of such fine care. Marc has a good job and his company gives the hotel brand tremendous business–maybe that was it? Or we had an exceptional place and supervisor, yes. Or then again, perhaps we so needed a quiet oasis that somehow we were allowed a true gift. That is how it truly felt–as if we were given what was so needed: solace, rest, beauty. Respite from the world. I was stunned by the rapid turn of fortune.

The views from the long terrace were perfect, with streets of the city fanning out, a glimpse of reflective Pacific ocean, a few giant palm trees in the distance silhouetted against bright spring light. Relief filled us as we surveyed the lively scenes.

We burst out laughing and high-fived each other. What a peculiar, surprising start to our holiday. 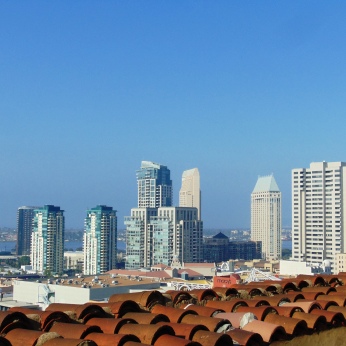 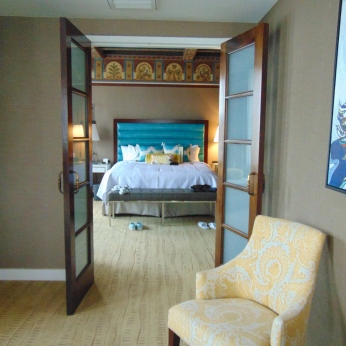 That was to be the first of a trio of trying, unexpected experiences. The other two will be noted in future posts. Fortunately, 97 percent of the time was filled with days and nights defined by happy, memorable moments together.

Our first night ended well. We moseyed about the immediate neighborhood and ate at a cheery pub in the historical Gaslamp Quarter. The area sports Victorian style buildings that include restaurants, theaters, shops, clubs– and is always jam-packed. There were throngs of people. We were in the thick of it at last and enjoyed people watching. Wandering further we found a calmer area with bubbling fountain and attractive courtyards. I was elated by all the new things to see and do, hands held in one another’s.

That night before we turned out the light we let our eyes take in the high coffered ceiling with colorful hand stenciled designs. We then slept deeply in a soundproof bedroom on a just-right bed behind French doors, excited to see what unfolded the next day. But I uttered a short prayer of thanksgiving for Jericho, the staff member who made it happen with such good will. I felt humbled and relieved at once.

And so our trip had begun. On Sunday we rose quite late, enjoyed a tasty all-American (eggs, sausage, potatoes, toast, juice, tea/coffee) breakfast and headed to the San Diego Bay and harbor. Along the Embarcadero we soaked up the warm and honeyed light cast upon all. It was breezy and comfortable the whole trip: “San Diego temperature.”

By evening I had forgotten mostly about the glitchy start of things. It is instructive that all grief can be reawakened, causing sudden vulnerability, a sense of being off kilter. The human heart is so tender if also tough. I recalled that Marinell, my deceased sister, had visited San Diego (her husband was a Navy and commercial pilot for decades) among other places–my extended family has traveled father and longer than have I– and how they’d have been pleased I got there. It was a comfort to think on it as I drifted off, my husband close by.

Please enjoy a few of the scenarios we found interesting our first full day. You may know that San Diego is the second largest naval base in the U.S.A. The many ships we saw were mammoth, both intimidating and awesome, and naval air traffic was a near-constant. Boating of all sorts abounds. Evident also in these photos is the Spanish influence on much of the architecture.

Next time: Mission San Diego de Alcala with its complex history and its quiet, mystery-laden spaces.

5 thoughts on “Wednesday’s Word: An Odd and Beautiful Holiday Begins”