The sky above the ocean took its time to fully darken. Striations of color and cloud floated against an indigo backdrop. The air was still balmy from a few days of unseasonal heat. Between my toes pale sand welled up in soft, miniature hillocks. The moon was rising and it was full, partially veiled for a few moments, seemingly with a swatch of chiffon. The vaulted, infinite canvas opened up as I walked. Waves rushed forward then pulled away, lit by moonlight. My bare feet were washed and cooled. Soon darkness would cover us all with its vast and mysterious cape. I felt protected, embraced.

We had come down from the beach rental with two bundles of crackling dry wood, just as many others had. My husband built a good fire and soon it roared to life, its heat almost too strong for the May evening. We watched the stars show themselves and bear witness to our earth activities. The moonlight soon cast shadows on the beach and I longed for a camera that would capture such magic. To our left and right there were small groups of people tending their fires, as many as twelve that I could count. Except for the sea, there was no distinct sound. In the distance, lights from beach houses winked. The fires burned bright. If people were speaking at all they were likely murmuring, as were we. No one seemed moved to carry on with the carelessness of revelers. Their presence within the warmth and dark felt natural, needed, as though we were all of one family, separated by short distances but little else. No other experiences needed to be shared at that moment. I considered how we had made our camps for the night, past travels good but tiring, our bellies now full. What was left was rest, companionship, availing ourselves of nature’s offerings. I felt our humanity a part of the universal whole and shivered. What else could we possibly want? 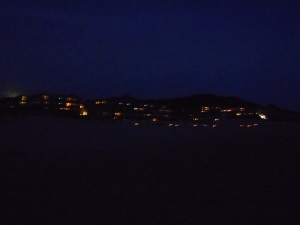 I languished awhile, then an idea came.

“Of course you would think of that. Just make one up?” He poked at the fire with his stick, happy.

“Yes, like we used to when too wide awake in bed or when tucking the children in so long ago. Remember how much fun that was? Just give me any story that comes.”

“Hmm. Okay, but first let’s look toward the moon for inspiration. The moon shadows are amazing tonight.”

We stood up, turned around and the moon threw her light on us as if a queen tossing silver streamers. And this time, she wore raiment made of colorful halos.

After we admired the lunar coronae (not halos as we later discovered), caused by a diffraction of light by small water droplets, and I tried to capture them with my camera, we sat back down and settled at the fire.

The Boy and the Silver Salmon

There was a boy whose people often fished by moonlight, so he found his quiet spot by the cool stream and cast his line. He had no luck for awhile and felt discouraged. He couldn’t go back without food. He tried again and again and finally he felt a hard tug on his line. It was a very heavy fish, and when he pulled it out of the stream he was amazed to find an enormous silver salmon on the hook. It shone like something precious and dazzled him when he finally brought it up to the shore.

Ecstatic, he held tightly onto the fish as it flopped around, its eyes wild, and started to run back to the village. They all would be so proud of him. They’d have a feast and invite their friends and neighbors. He might get extra food or a better reward. For all time they would tell stories about how he landed the biggest, most fantastic salmon ever.

He panted in exhaustion as he reached the end of the forest path. Then he stopped. What if they would be angry that he caught such a rare salmon? There might not be any others like it. Maybe he had done the wrong thing to keep the salmon, after all. He looked at the gasping fish and thought it better to take it back. But it was really too late for that. Instead he tossed it up into the sky and asked the Creator to keep it in a special place. And the Creator took the fish and put it around the moon.

And that is why we can now see the moon’s radiant corona.

I clapped heartily. “That was wonderful!”

I felt my attention pulled to the darkened ocean, its white-crested waves rolling in and out. Majestic and powerful, it taught, fed and lulled us while carrying out crucial work for all creatures. I felt humbled by its mystery.

The Woman and the Sea Heart

The Woman walked by the sea waters night and day. She had worries about her like maddening birds. Her silent words were captured by the sky and held there, waiting to be heard by the Loving Being. The Woman had charted the stars and followed the sun’s travels for decades yet she still sought wisdom. She knew her days left were not as many as she had imagined. Her strong back had begun to round like a worn rock. But she had not quite finished what she had to do.

She had a daughter, Linga, who had long left the old hearth. She had gone off to seek her fortune, which she did find. There was word that she had spanned the earth and done things that brought her favor and accolades. It had been many years since Linga had been near the home of her childhood, for she was engulfed by works of the world.

The Woman knew her daughter had gifts to give, had ways that were needed, and had let her go without a complaint. She knew that mothers gave life to let it go and find its own way. She wanted to once more find Linga’s shadow on her doorstep. She wanted her to remember to nourish her soul, not just mind and body. It was getting late. The Woman felt time was like breath, here and gone. She needed her daughter close to her before the sea was no longer seen by her human eyes.

As she walked she was captivated by sparkling crests of waves, how blue and bright they were, and how gaily they danced. She sang her deepest prayers until the glittering lit up the horizon, then transformed into azure orbs that rose up with her song’s longing. The Woman watched them float and when the night sky covered her, then hid the orbs, she went home to bed.

In the morning she was pulled to her senses by a magnetic light coming from her table. She eased her way toward luminescence, full of a small hope. Then she discerned the pulsing azure heart. She held it with tenderness, pressed against her own blood and sinew heartbeat.

There was a loud rap at her door. The Woman flung it open. There stood Linga, her nearly lost daughter, for whom the great sea heart beat. They fell into each other’s arms. The azure heart found Linga, and kept her always close. And the Woman was at peace until her very end on earth.

“Ahhh…” my husband said. “Very good, I really liked that.”

The moon, stars and ocean, the fires scattered like jewels across midnight sand–we were all snared by the enchantment of a spring night. And it was better than I can tell you here. Go out into the soft night. Build a good campfire. Let the stories come.