Cam steadied herself on the bottom step. She could hear their bright voices beyond the wall, laughter punctuating conversations like a foreign accent. There was fragrance of food unlike any she recognized, rich and well spiced. Her stomach lurched and she leaned on the wall. She felt ready to leave. A phone call with apologies and an excuse of sudden headache would not be thought contrary or so surprising. She was the woman they barely thought to count as one of their own, after all, and certainly not since the events that unfolded over summer. Her watch indicated it was not quite past the brunch hour, yet she felt as though it was both too late to enter and too late to leave.

What could they be saying? She strained to hear and caught snatches of sentences. Something about Harry’s shoes, how they were a “tad long” but grandchildren grew fast; she wanted to shop for “first year of private school and all.” And then other words about editing, “failed efforts at improving miserable copy” and Cam thought of Marie at her mahogany desk, hair pulled back from her face into a long grey ponytail, eyebrows arched, lips tinted raspberry. Then laughter and another–was it Giselle?–woman noted that her husband was travelling south of the equator “of all places.”

Cam felt a ripple of anxiety and turned her back to the brick steps. It was too hot for September, or more likely she was in a feverish state brought on by the nearness of these people. She imagined them in a tight circle around the glass table in the garden, manicured fingers gripping drinks, faces peachy–and caramel, including Fran–in the sunshine. Cam irrelevantly mused on how women used make up named for food or sweets. Sensory delights. She was likely persimmon, red-cheeked and tart, even sour. This somehow cheered her.

Her shoes hurt. They were new with medium heels, bronze-toned leather–to go with a long sage green dress she’d found at the back of the closet. There hadn’t been time to change her clothes over from summer to fall. She didn’t care. Maybe when the rains hit she’d find her sweaters and pull them close, feel their heavy cotton a comfort. But now she dreaded the clear weather fading fast, the thick clouds that would knit themselves together and refuse to split open so light could break through. In summer, after the horror, she could lose herself in forests and meadows, hike for hours with snacks and water and no one to impede her. Being alone meant peace.

All too soon she’d have to sit in the house and remember. Think of the day she was taken away. The categorizing of her grief determined by the so-called authority of the DSM-IV Diagnostic and Statistical Manual for Mental Disorders: Major Depressive Disorder  officially speaking. In essence, depression gone terribly awry. Ending in a sort of mini-breakdown with a day in jail and five days in a psych unit. She thought it just the exhaustion of sorrow cloaked in a brazen attempt at revenge. The psychiatrist had to be paid; insurance needed codes.

What would they have done? The women here, with whom she hadn’t officially become that friendly–they waved in passing, nodded on the street when they walked–and Marie, almost her friend before the crash. Would they have just shopped more, disregarded others’ poor choices? First the move here which Cam did not want; then Puck, their dog, getting lost or stolen; then their son’s, Alan’s, drunk driving accident, lost job and return to the new family home. The accident did more damage than they suspected and he suffered, as did they. It took until late August for Alan to rouse and return to Nevada and a faltering design career. And then her husband, Nate, and Rebecca Moore, “the VP of Marketing” he said off-handedly, seen at the golf club. Not once. Four times. Not during company events.

She shuddered. Even thinking that woman’s name stirred up residual but excessive anger. But how noble would her neighbors have been? She had tried. But eventually, after three months of it all she “took the roof off”, as her husband noted more than once to the police. What he meant was, Cam had had two very stiff drinks, tossed the pots and pans all over the kitchen, overturned his dining room chair and when she had thrown the fuchsia and apple green pillows off the couch three lit candles were knocked over, igniting newspapers and magazines. Alan sat on the porch in shock. Well, it was a nightmare, she agreed. She had behaved poorly and was embarrassed. Then came the shame. Never had she lost her temper like that, never had she screamed such things at Nate. She needed time out, room to breathe and think. Now she had a decent therapist and her husband had come to his senses. Maybe. She agreed to no more alcohol and he agreed…well, he said he’d be home more from now on. In autumn’s chill they’d sit before the fireplace, just talk. By winter, maybe there could be love again. 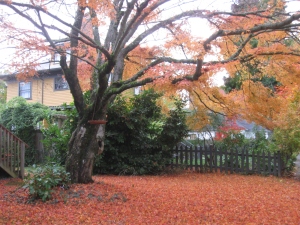 The brunch carried on. The talk was muted; they must have been eating. Cam wiped her damp face with a tissue. They didn’t understand her and why should they? They didn’t know her, didn’t know how life could turn upside down in a flash. She looked up the steps to the gate and the sun blinded her. Then she saw the outline of Marie’s head, sleek ponytail swinging.

“You should come and eat with us. The gals are all waiting to see you.” She opened the gate and stepped down. Her face was a relief to see, open and warm as always despite those fine, hinting-at-haughty eyebrows.

Marie laughed in a chesty way that was restrained but full of timbre. “Oh, heavens, never mind any pretensions. They all have their own sad stories! I’ll share the mantle of shame with you over coffee one day. But I want you here. I want you to come over any time, but especially when I cook. Who else eats my marvelous dishes? Dan is gone a lot and my daughter only eats smoothies and salads.” She linked her arm in Cam’s and looked her straight in the eyes. “You’re human. It’s quite alright.”

Cam felt something lurch inside, as though the heavy stone in her heart had been pushed aside. She felt tension drain a little. Maybe she wasn’t that unique. Life could be flush with craziness. She put her arm around Marie’s waist and they climbed the steps to the gate, flung it open, and stepped into the party. Their neighbors raised their glasses and cheered.