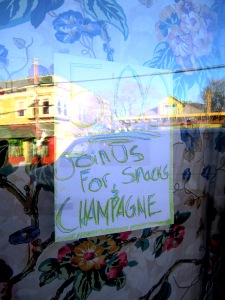 Well, it’s here again, New Year’s Eve, so my plan is to get this written and do other things, just like you. I’m not dressing up, though the pricey heels I splurged on for a daughter’s wedding have beckoned from my closet. I don’t intend on dropping a lot of cash for a rousing city celebration. I’m not even throwing my own party here, though at times I have, with a sumptuous repast (well, mostly potlucks) and everyone gabbing and meandering. Admittedly, I can become wistful and daydream about dancing during this holiday but rarely have since sliding past forty. (I do intend on taking more flamenco dance classes and Zumba–but first I have to finish off 2014.)

No, I’m soon to wrap up in a velvety sage green blanket and hunker down in my favorite chair with a couple of magazines or a book. Get drowsy just as the neighborhood’s fireworks go off. But the reason why I’m in for the night is not to just relax, nor to avoid the cold snap we’re having.

Earlier this day my husband and I were taking a good look around a newly renovated neighborhood. Portland has very distinctive areas that have a surfeit of atmosphere. I hadn’t much thought about the meaning of the day as we strolled the blocks in brilliant sunshine. The sky was so blue it vibrated. I was taking photos every few feet as I do no matter where we are, noting the changes architecturally and shop-wise. Scores of people were partaking of the simple pleasures a rain-free day affords in the Pacific Northwest. We finally stopped at my favorite tea purveyor for a take-out cup of cinnamon spice rooibos and crossed the street.

And that is when the quaint scene presented itself, an old brick building that had been spared, then perked up with new paint and decorative signs. It had a front door that drew me, then stopped me as I snapped another few photos. Then I read the sign: “5:00, Join Us for Snacks and Champagne.” (See first photo.)

I paused, imagining what it would be like to enter that atractive, arty restaurant, pull up chair to table and dig into a bowl of snacks as I sipped champagne with spouse and friends. And do it as if this was a natural event, a gathering of convivial folks who imbibed alcohol and savored tasty food with it. Without a second thought.

That will never happen for me. Not again.

I can’t recall the last time I drank during New year’s Eve. I doubt it mattered. Oh, I drank, just not on special occasions. Then I likely was alcohol-free so no one knew the power alcohol had over me. I was twenty-seven, late to start use of the mood enhancement and pre-sleep relaxant. It was wine then, cheap and red and taking up only half an ordinary glass. It was lovely. Innocent. Until it wasn’t. By the time I was in serious trouble three years later I could drink a half pint in a short time, with or without a mixer. I was a small woman, about one hundred pounds, so it hit fast. But it continued to ensnare me for a decade, off and on.

Drinking was never a time to party for me. It was a socially acceptable assist to the procurement of a comfortable state of being.  It blunted the grief of random heartache. A glass or two of wine brought me a slumber rich in forgetfulness. Later, liquor loosened tightness in my chest, took the poisonous sting out of  real and imagined failures, helped me avoid dangerous spots in relationships. It made things that were awful more acceptable and depressing, funny. Or so I believed. It seemed ridiculous to consider that it might one day commandeer my life. I had hardly enough years to try out more than a few kinds of drinks. But it happened. Fast. Why? I may never know for certain; my family tree is not an alcoholic one. I was proof that it doesn’t require a clear genetic connection, many decades of heavy abuse, or great quantities to cause big trouble. For many, alcohol becomes a forbidden fruit.

From friends forcibly taking and delivering me to substance abuse treatment to being rushed to an emergency room, I experienced a surprising and compelling powerlessness. And it all started with one drink, that first moment when I looked at an unopened bottle and realized this attractive package held a chemical that might loosen knots in my shoulders and mind. It did, enough that I’d tried it again and again. It seemed easier to drift through rough times as long as there was a glass of magic elixer at hand. But that lasted so briefly I don’t recall if it was a good time.

What alcohol did was erode any remnant of real peace, threaten my health, damage my relationships and replace a natural inclination to celebrate life with an unpredictable attitude. My state of mind became fueled by resentment, bitterness, fear and profound regret, the sort that seeps into the heart and soul and cannot be excised. Did I really see that? No. I was a very competent wife and a well-organized mother of five. My spouse was making excellent headway in his career. When I started back to work I did well, and rose quickly. But the last drink I took was twenty-five years ago because it all sneaked up on me, won every battle I waged against it, twisted and ruined far too much. I had to surrender to the absolute reality that alcohol and I were not close to being friends (despite my imagining we were) and never would be. We were never meant for each other from the start. It was ultimately a near-fatal attraction.

I have never looked back with longing. Why return to darkness when living in the light is so tender, so forgiving? So illuminating with its beauty and power? But sometimes I see a beguiling ad or laughing couples sharing a glass of wine at a cafe. I ponder what might have been if I was not who, in fact, I am. Then go on my way. As it is, I am one of those people who has escaped death more than once, has had physical damage that took years to repair, has endured traumas and experienced internal healing. And I have been blessed with a faith in God–and His love for me–that overrides doubts and carries me into the mysteries of life, then instigates joy.  I’ve had the opportunity to serve others in need, for all suffering–in our lives and in others’–is an opportunity given so we can develop and offer compassion. And what a liberation that is.

It is New Year’s Eve, yes,  and I choose to write of alcohol because I know people out there will die tonight. They will drink too much and drive drunk with catastrophic results. They will drink too much and, shockingly, poison themselves. Someone will drink on top of other drugs and overdose, lose judgement or self-control and say and do terrible things they cannot ever take back. I know this in another way most vividly, as I am a retired substance abuse and mental health counselor. It causes me grief even now to think of those lives lost to the most desired and potent drug in all history: alcohol. There were so many over twenty-five years.

For the person, male or female, young or old, who should have multiple opportunities to flourish, to just awaken to sunlight streaming across their blankets, who should reach for arms to embrace: I want you all to greet 2015 and count yourself blessed. This is my passionate hope. If alcohol is making your choices for you, maybe this year you will put that goblet or bottle down and seek change. Walk away, turn the corner, risk another path. The life you will get to lead will be more miraculous than you ever imagined. I’ll be rooting for you every step of the way.

4 thoughts on “Weather Report: Dry and Sunny (Alcohol Not Included)”